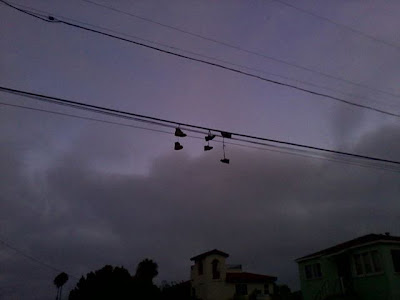 (What I should make clear is that I am not a practicing Christian , have the mind of an agnostic, and haven't much faith in theologies that pretend they have knowledge of what the end of history is like. I do appreciate the poetry of The Rapture concept, though, and meant only to create a "what-if" scenario, such as what would be like if this event occured in one of the many neighborhoods John Cheever might have attended cocktail and wife swapping parties at.I'm agnostic toward religion, not God. I've done my seeking and have found what I've needed. Needed today, to be even clearer.
A usefully spiritual life is a day-at-a-time thing, and this day, this morning I'll seek guidance for the day yet to come. Plainly, I don't think God is much concerned with getting the lot of us into Heaven as He is living good, useful , creative and and kind lives in this life, on this planet. If God is all wise and all knowing, He hasn't the time nor patience to set up our existence like it were a Game Show. -tb)

gold tones like the frozen poses
of ancient photographs

found under the stairs of every parent’s house
that aging children have to close.

You see the mailman on his knees and wonder
why he’s praying, hardly aware of the increase in light

passing cars, it’s such a shame that religious fanatics
are hired to deliver the mail, you think, so much depends

on what comes through the System, envelopes full of
what’s owed and what’s not covered by any plan

that can be written down; you run the water in the sink,
you wonder where did the clouds go?
There is no rain anywhere,
says the radio announcer,
and the light is tremendous all over the globe,

there is not a dark corner
in any corner or nook on the earth,

And then the radio gives out to static, and the TV
releases itself to snow, the music in the street is very loud

and up the driveways, into the homes with each reed instrument
improvising disembodied melodies that form their own sheet music,

That is a very loud set of speakers in that passing car, you think.
and the radio announcer cuts through the music and says something you

hear as that millions of people all over the world have just vanished in
plain site under bright light and big bang music, gone in a wisp and puff of smoke,

You look at your watch and note that it’s time for lunch,
the clouds have fallen over the city again, the sky darkens,

the shapes of the neighborhood take on their deep hues again, saddened
with history, dense in dumb witness to what never ends,

You stop, look out the window; you turn off the water you ran,
in the middle of the street, by itself, flat on the cement,