There is no noise with out silence 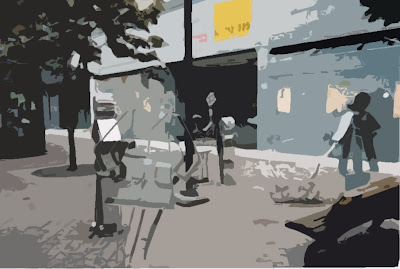 Truthfully, I like noise, dissonance, blistering beats and bangs, cacophony of all sorts, screaming guitar solos, atonal saxophone pirouettes, collision prone drum work, pianistics imposing order onto uncontainable randomness. The scrape and scratch is the cadence of the urban life, due to either traffic congestion, jackhammers on every corner, crimes in progress, or downtown music’s ranging from industrial grate to loft jazz to post-vinyl hip hop; abrupt, big shouldered, bullying, the Futurist dream (or nightmare) of jettisoning the Present and blasting a tunnel through the mountain of complacency towards an unknown future. Or maybe even destroying the mountain altogether; what we can surmise, though, is that it
isn’t the future that is the matter of concern for anyone making this kind of noise, but the noise itself, the badgering, persistent barrage that will not give you a minute of quiet time. There is no room for reflection or  regret, there is only the task of making this    existence so unlivable that we will all eventually rise and demand Eden now, or at least aid in the destruction of those  technologies, customs and accumulated culture that makes the question concerning the quality of life a Moot Point.

But there comes the moment when I have to take a breather from being the frontlines of my combative aesthetic and seek tunes, poems, movies that provide respite from the grind; sometimes I wake up and think clearly for a moment that existence is already noisy and that my abrasive taste in tunes accelerates no inevitable dialectic.Fun as it may be, no universal good is being served. In fact, I am only adding to the clutter, in essence, becoming part of the problem. Sanity, for the time being, prevails , balanced on a thin sting, and my premature jitters seek , for a change, succor, not assault. The quiet side appeals to me as well, much as I love abrasive post-bop jazz improvisation ala Cecil Taylor or the raucous cacophony of Charles Ives;  there are those moods when what I need from art—and art is something which is a need—is a short harmonica solo, a small water color in a simple frame, or a lyric poem that dwells comfortably, musically on it’s surface qualities. One loves grit, but that doesn’t exclude finesse. Mark Strand’s poem here won me over with it’s surely played music.

My Mother on an Evening in Late Summer
by Mark Strand

1.
When the moon appears
and a few wind-stricken barns stand out
in the low-domed hills
and shine with a light
that is veiled and dust-filled
and that floats upon the fields,
my mother, with her hair in a bun,
her face in shadow, and the smoke
from her cigarette coiling close
to the faint yellow sheen of her dress,
stands near the house
and watches the seepage of late light
down through the sedges,
the last gray islands of cloud
taken from view, and the wind
ruffling the moon's ash-colored coat
on the black bay.

2.
Soon the house, with its shades drawn closed, will send
small carpets of lampglow
into the haze and the bay
will begin its loud heaving
and the pines, frayed finials
climbing the hill, will seem to graze
the dim cinders of heaven.
And my mother will stare into the starlanes,
the endless tunnels of nothing,
and as she gazes,
under the hour's spell,
she will think how we yield each night
to the soundless storms of decay
that tear at the folding flesh,
and she will not know
why she is here
or what she is prisoner of
if not the conditions of love that brought her to this.

3.
My mother will go indoors
and the fields, the bare stones
will drift in peace, small creatures --
the mouse and the swift -- will sleep
at opposite ends of the house.
Only the cricket will be up,
repeating its one shrill note
to the rotten boards of the porch,
to the rusted screens, to the air, to the rimless dark,
to the sea that keeps to itself.
Why should my mother awake?
The earth is not yet a garden
about to be turned. The stars
are not yet bells that ring
at night for the lost.

Mark Strand is someone who often works overtime to make the small things he chooses to write about into subjects that are poetically overpowering. Though he wouldn't be guilty of some fever pitched overwriting that makes the work of Nobel Prize Winner Derek Walcott seem like a riotous thicket of over simile’d  commonplaces--it has been said that the prize winner has never met a qualifier he didn't fall in love with and promise a home to--Strand has always seemed to fall just short of adding an item too many to his verses.

He does have a leaner, more genuinely lyric movement than does Walcott, whom I find more ornate than satisfying. , to his credit , doesn't obscure the emotion nor the place from which is figurative language is inspired, arch as it occasionally reads. Walcott the poet, the world traveler, the cultivated Other in the presence of an Imperial Culture, reads like someone how is trying to have an experience. convinces you that he has had one, indeed, but that he over estimates the measure of words to their finessed narrative.

That said, I like this, in that Strand trusts what his eyes sees, a series of things his mother was doing in a wonderfully framed triptych that might have been conveyed by Andrew Wyeth. It is a little idealized--the lyric spirit is not interested in the precise qualifier, but that adjective or verb , that rather, that both makes the image more musical and reveals some commonly felt impression about the objects in the frame--but here has a relaxed confidence that is very effective. Brush strokes, we could say, both
impressionistic and yet exact.

Soon the house, with its shades drawn closed, will send
small carpets of lampglow
into the haze and the bay
will begin its loud heaving
and the pines, frayed finials
climbing the hill, will seem to graze
the dim cinders of heaven.
And my mother will stare into the starlanes,
the endless tunnels of nothing,
and as she gazes,
under the hour's spell,
she will think how we yield each night
to the soundless storms of decay
that tear at the folding flesh,
and she will not know
why she is here
or what she is prisoner of
if not the conditions of love that brought her to this.

This is the image of someone going about there daily chores and fulfilling their obligations thinking they are out anyone else's view, or better, the agenda of someone who hasn't interest in impressing any set of prying eyes. The mother seems less a figure in solitude than she does to contain solitude itself, comfortable and with intimate knowledge of the grain of the wood the floor is made of, the smell of the changing weather, the different pitches of silence and what the nuances of small sounds forecast for that evening and the following day. Most of all, this is about watching the world, the smallest world , both grow up, grow old, become frail and die, finally, aware of the seamlessness of going about one's tasks and the preparation for the end. This is a poem about preparation, I think; we, like the Mother, come to a point in their life when the gravity of things are finally felt through accumulated experience, as one's responsibilities have been added too over the years, and one develops a sense that what one does isn't so much about setting ourselves up for the rest of our lives, but rather in preparing the ground for what comes next, who comes next.

Somewhere in the work , toil , the bothersome details we get to rest and earn an extra couple of hours to keep our eyes close. The change happens slowly, unperceived, but it does happen, and the planet is a constant state of becoming, of change, and what changes too are the metaphors one would use to determine their next indicated jobs.

Why should my mother awake?
The earth is not yet a garden
about to be turned. The stars
are not yet bells that ring
at night for the lost.