I know a little something about watching silly old movies late at night while making my through a half dozen sloppily made drinks; there is that smug satisfaction, that blurry clinging to a vague present tense that informs you that only this minute matters, that this giving into cravings, impulses and desires matters that the ridiculous black and white dramas on the television actually account for something you must pay attention to blasted though you may be.

I am not saying that Rita Dove's protagonist in her poem "Insomnia Etiquette" has a drinking problem like the one that nearly put me under. Still, the good poet does get that feeling of what it's like to be in the middle of a numbed out mood, dealing with a series of bad days or years or taking the pause before coming to terms with some life complications that will be there in the morning when the fog has lifted, and the headache begins. I am saying that Rita Dove knows something about how  I've felt and at times recall too vividly when the memory works overtime.
Dove has a wonderful way of chipping away at the verbal excess that other poets might be tempted to smother a theme with and thereby kill the idea with a chronic reworking of cliches and tropes about drinking and heroic isolation; rather her language is spare, but not spinal, such as Charles Bukowski's tends to be. She lets the mood thrive, as it were, to define the character's fluid movement, enjoying the very fact that they are in a liquid orbit, temporarily liberated from gravity and regret. Everything else in her life is a series of emotions, confrontations, and decisions that Come Later.
And I am thrilled that the poem is brief, with this lyric of half-verbalized contemplation refusing to devolve into a wallow or try to make something more of itself by transforming into an absurdly overwrought rant against unfair chances and bad choices. Our hero is behind enemy lines, inside the experience, aware of what comes after the escape into numbness. It is mock-heroic. One raises a glass to their waning awareness of their own absurdity and then returns to the mood's muddled center.
at April 09, 2012 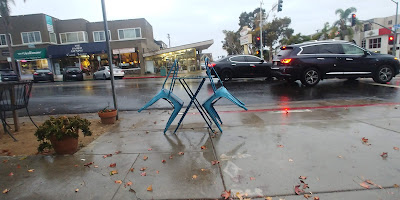