the failure of some 9-11 literature 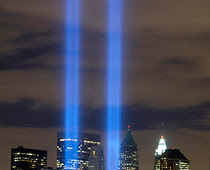 A week ago, after work, on a crosstown bus, and all I wanted for the half-hour ride was to read the galley of  Don DeLillo's novel, Falling Man, a ruminative narrative highlighting the lives of New Yorkers on the day of the attacks, 9/11. Finally, a novel about the attack that matters; not to give too much away, but this is prime DeLillo, exploring the sober side of what was White Noise's premise for a postmodern comedy, the disruption of fixed and certain lives by the intrusion of an event beyond imagination.
In White Noise, the effect was comic, funny, and all ironies laid in the day were comedies of the clueless trying to make peace with the nagging changes that cause everyone to avoid the void as they try to retool old habits with new explanations, theories, contrived proofs that the world will return to normal. Now it's a tragedy, and the quality of irony finds itself made ironical. The attack on the World Trade Center puts us beyond abstractions like comedy or tragedy, on which one can grasp onto something fixed in their minds as a normality they can get back to. All is muted, rendered mute. Rationalization is deferred. And our expectations of what DeLillo would make of the penultimate attack on America's symbolic sense of being the world's best asset mounted to levels that were nearly toxic with glee.

DeLillo, however, is a writer who might have played out his themes and investigations of a hyper-technological democracy whose inhabitants are searching for a useful past as a way to make the fractured, reshuffled and decentered present to at least seem to have thematic continuity. "Falling Man", the 9/11 novel, strikes me as a book of riffs from a musician who can barely muster the energy to run through his songbook one more time. In the odd sense, in the cruelly ironic sense, it's a tragedy that the attack on the World Trade Center attack happened after DeLillo hit his peak with "Underworld", as masterful of novel of America our propensity for distracting ourselves in ritual, obsessions, insane hobbies and esoteric systems of knowledge--performance art, baseball history, high finances, unrepentant consumerism, ceaseless works of charity--to keep the suspicion that all our material gains and assumptions are based on no fixed moral platform.

There are some fine sentences here, some splendid descriptions, but there is listlessness as well. "Falling Man" is finally dull, and even DeLillo's prose mastery can't make this alternating saga of survivor despair and terrorist preparation rise above the merely serviceable. DeLillo is overwhelmed by the topic, not so much for the impossibility of writing a brilliant novel in the post-attack atmosphere, but because all the themes he has relevant to the present condition are expressed more powerfully, poetically, with larger and surer measures of canon-making genius than the comparatively provincial exercise the author has issued here. It’s also a matter of whether beautiful writing is appropriate for a novel specifically concerning itself with the physical and psychic costs of 9-11; folks like Laura Miller, Meghan O’Rourke and Frank Rich have wrestled with the issue of whether drawing metaphors and similes for larger contemplation is somehow immoral when addressing the events so catastrophic and fatal. Art, in the uppercase, means framing the materials and objectifying them, taking them from their contexts and positioning them in ways that will force a deliberation over their existence; this is the aesthetic distance, beauty removed from our hands and set aside so we can contemplate some feelings in absence of real-world distraction. 9-11, though, is thought by many to be above such contemplation, that this date cannot be abstracted as material for art-making, literary reflection.

Brat Pack novelist, Manhattanite extraordinaire Jay McInerney got urge to step up to the plate and write a Great American Novel, a work that would raise him finally from the middle rungs of the literary ladder and allow him to reach the top shelf where only the best scribes--Hemingway! Fitzgerald! Thomas Wolfe!-- sit and cast their long collective shadow over the fields of aspiring geniuses, furious scribblers all. McInerney has selected a large subject with which to make his reputation, the catastrophe that was and remains 9/11. Acutely aware that the minor league satires and soft coming of age stories that made his name were less commanding than they had been because "9/11 changed everything" (a phrase destined to be the characterizing cliche of this age) he offers us The Good Life, a mixed bag of satiric thrusts, acute social observation, two dimensional characterizations and wooden generalizations about the sagging state of society, of culture, of our ability to understand one another, locally and globally.

I agree that Jay McInerney is a better writer than he's been credit, but history will judge his novels as minor efforts at best. Witty and observant, yes he is, but the manner in which he conveys his best lines, his choicest bon mots have the thumbed-through feeling of a style borrowed. Fitzgerald, Capote and John Cheever are his heroes, true, but there's nothing in McInerney's writing that honors his influences with the achievement of a tone and personality that is entirely his own, an original knack of phrase-making that makes a reader wonder aloud how such wonderful combinations of words are possible. His influences, alas, are visible and seem to be peering over his shoulder. Even what one would praise as sharp and elegant observations from his keyboard creaks not a little. The style sounds borrowed, and our author sounds much, much too dainty to make it really cling to the memory:"The hairstylist was aiming a huge blow-dryer at his wife's skull, which was somewhat disconcertingly exposed and pink--memento mori--in the jet of hot air ... "

McInerney is compared to Fitzgerald relentlessly since his career as a professional writer began, in so much he, like F.Scott, was bearing witness to a generation of conspicuous consumption and waste, but one notices that any random paragraph from The Great Gatsby contains more melody by far. The writing genius of Fitzgerald, when he was writing at his absolute best,was his ability to make you forget the fact that you're reading elegant prose and have you become entranced by it. It was a means to put you in a different world altogether. It's this simple, really; you didn't see him writing, you didn't see him sweat. Able craftsman, as well as peerless stylist when he was performing best, Fitzgerald's prose, seemed natural, buoyant, unstrained. McInerney's writing reveals that strain, that slaving over phrase and clever remark,and often times the effect seems calculated.In his best moments, he rarely sheds the sophomore flash; after all these years our Manhattan golden boy still writes like the most gifted student in a Kansas City composition class. After all these years he is still trying to outrace the long shadows of those who brought him reading pleasure.

This is a wandering and traipsing along with the subject matter like a drunk tourist gawking at the bizarre ways of the big city, a laughable and loathsome tour of Corn's intellectual baggage.   "Windows on the World", a poem written by Alfred Corn and published in Slate on September 11, 2003,is an ill-conceived poem commemorating the attack on the World Trade Center that would seem to confirm the skeptic's view that poets are willfully suffering narcissists who think everything in the world is in play in order to disturb their peace. In other words, to fuck with them. It's strange, odd, perverse, and somewhat immoral to write a poem using the 9/11 attack as a pretext to write another self-infatuated poem that really is more about how much the writer thinks about himself and his assignation as a "poet"; whatever the god damned what Corn puts on his tax return as "occupation" has to do with the still barely speakable horror this day has come to mean is beyond any sense I can find, and worse, it is beyond anything useful to others.

Connecting the attack with the crashing of the Windows operating system is a ploy him to remain a thousand miles from any connection with real emotion; it is relentlessly ironic and snobby in its form as a poem. The subject matter, the real horror is aestheticized out of mind the way a narcotic lulls one into a stupor and then a nod against a world that still must be faced and made sense of. Corn does none of that at all, but what he does do is give us a long, wavering and arrogantly ambivalent stretch of muddled semiotics where everything is a straining reach, a forced association, a willful perversion of real imagist reach. Had the subject not been so grim and disheartening, this would seem more parody than anything else. This poem angers me to no end. If Corn was paid for this piece, he should feel honor-bound to donate the sum to a cause that actually gives hope to others in the human community. Following that, he might quit whatever teaching job he as in the instruction of writing and get a job in the receiving area of a Salvation Army Thrift Store.
at September 11, 2011