PUT THIS DOG TO SLEEP 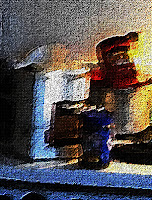 Classical allusions  are enough to drive a good man to drink a dozen soda pops and belch until the sun comes again to the garden of night with a rosy fingered dawn. That is to say that a smart allusion  might, just might make a poem snappy and perhaps provide a deeper echo of  response after an attentive reader finishes a third or fourth reading. But you need to choose your references smartly, and be smarter about where you  position them. Otherwise it becomes comic opera, over dramatic, crucified by self-importance.

Xenia
Most days that summer your old dog came up,
in the searing heat, with a failing heart,
from your place, the half-mile uphill to mine―


up the steep rise, past the pastured goats, on
the buggy trail that swerves through blueberries.


As you pointed out, The Odyssey
is full of tears, everyone weeping
to find and lose and find each other again.

Spent, he struggled the last two hundred yards,
ears low, chest heaving. Hearing
the jangling of his tags I knew the gods


had chosen me to praise him for his journey,
offer food and water, a place to sleep.

I would admit that it's not an uncommon to have the incidentally tragic in your life to remind you of something that you read years before, but you have to ask the question as to why the poets needs to bring it up at all. It becomes an offhand way of name dropping the title of a canonical text into a poem that attempts the small significance of a dog growing old and eventually passing on. Perhaps there is no credible way of writing about something this minute without coming across as pretentious, sentimental or pompous. Becker does us a service by avoiding a deep wade through the bristling thicket of obtuse reference, but even this light toe-in-the -water approach, to mix metaphors, is off putting for the reason I object to poets habitually referencing that they are poets, poetry in general, or titles from their private library. It has them thinking about what they've read rather than ponder an experience they are having and, for me, that is a tendency that entirely misses the point of this kind of small commemoration.


The prospect of reading someone who is self-critical enough to doubt that they are genuinely generous and giving with their fellow citizens and creatures is seductive enough as is, as this kind of reflection can indeed go to the general notion of the alienated individual in communities that are becoming increasingly fragmented, complex; one comes to wonder whether the virtues or those about them seem to have are genuine and without affect, or if they're mostly performative, ie, good manners and thoughtfulness put forth merely as a means of easing through a day with the least social friction. This reflection, though, is very expressible without the insertion of The Odyssey or the use of an obscure word for the title. I venture to say that what Becker's poem accomplishes is not clarity, the isolation of a fleeting sensation in original, fresh language, or revealing a world view different from the reader's own. It comes across as rote behavior seen in far too many poets who cannot step outside their conceit that they bear the title of "poet" or worse, "intellectual" and refrain from making their subject matter dreadfully , boringly entombed in literary reference. I would be impressed if someone could ponder this self-doubting in a way that makes you think of someone actually in the world, pausing due to a strong and almost overwhelming rush of feeling that defy book marking. Becker had the reference to the Odyssey at the ready prior to this poem being written, and this, in effect, makes this poem dishonest.

The basic problem is the sheer absurdity of this enhanced recollection--someone feeling the pain of self-recrimination because they didn't accord an old dog the same dignity as a friend or relative who, quite suddenly, ascends to nuanced and footnoted heights of existential despair. Becker manages to serve the stereotypes of poets as people who are so improbably sensitive to the capriciousness of existence that their sadness exceeds mere suffering and instead becomes epic. This is the poet immobilized by their grand response to situations, feeling deeper, harder, more elegantly than do non-poets; this makes the poem practically useless as a vehicle to jolt a reader into thinking about experience in another way.


On the same subject, Michael Collier takes the same tale in his poem “Argos” and smartly deals with the story itself; the tale is made fresh,lively, without being subjugated to the service of  a trivial whimsy.


If you think Odysseus too strong and brave to cry,

that the god-loved, god-protected hero

when he returned to Ithaka disguised,  intent to check up on his wife


and candidly apprize the condition of his kingdom,
steeled himself resolutely against surprise
and came into his land cold-hearted, clear-eyed,
ready for revenge – then you read Homer as I did,
too fast, knowing you’d be tested for plot


and major happenings, skimming forward to the massacre,
the shambles engineered with Telemakhos
by turning beggar and taking up the challenge of the bow.


Reading this way you probably missed the tear


who’s nothing but a bag of bones asleep atop


a refuse pile outside the palace gates. The dog is not


a god in earthly clothes, but in its own disguise


of death and destitution, is more like Ithaka itself.


And if you returned home after twenty years


you long ago abandoned, rising from the garbage
of its bed, its instinct of recognition still intact,
enough will to wag its tail, lift its head, but little more.
Years ago you had the chance to read that page more closely

but instead you raced ahead, like Odysseus, cocksure
with your plan. Now the past is what you study,
where guile and speed give over to grief so you might stop,
and desiring to weep, weep more deeply.

I much prefer the Collier poem, and thanks for posting it here for contrast. It works wonderfully, it flows, it achieves a wallop in a flowing, unpretentious language due to, I believe, Collier's decision to deal with the tale and it's moral ambiguity directly, in a contemporary tongue. Rather than treat  the tale as a gratuitous texture to some small event that cannot sustain the allusion, Collier's narrative world is whole and integregated. He assumes the logic of the standard tale and provides it a lightly applied modern dimension of articulated alienation, in scale, never dwarfing the dynamics with a blundering reference to other literary adventures; the tale and its already problematic contents are left intact.