"The Irises" by Lisa Russ Spaar 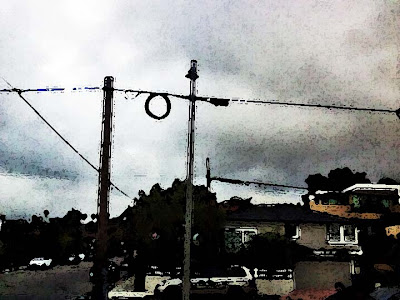 Although I think I get the general drift of the poem, this verse does not work in any pleasurable sense. Dickinson, the obvious model here, is a difficult poet to emulate; he cribbed and dashed poems, notes and asides were a massive examination of her particularly stationary existence , private notes, in a sense, and since she made little or no effort to have work her work published, it's not far afield to think her technique, revolutionary as it was, was a private language that was  an ingenious way to have a conversation with her muse, the linger suspicion that all is not settled on matters of appearance alone.

Dickinson's writing, compact and profound when it wasn't merely odd and stoically twisted, was a subtle interrogation of a conspicuous yet minor metaphysical concern; what is the stillness beneath the still of things like? Only posthumous publication and the creation of a critical language of her poems made her peculiar syntax a public matter. Lisa Russ Spaar tries to extend the style to a longer poem that contains ,say, two or more layers of inference than the two or three Dickinson dealt with and the result is a lack of poise or balance between the disguised intangibles.

Dickinson's dashes had the effect of revealing a mind that could contain two fully formed thoughts simultaneously and offer up a larger irony regarding the size and weight of first impressions being modified with a witnessed passage of time. Spaar could have well dealt with the mysteries of a garden and the creatures that inhabit the tilled terrain--she appears envious that while she takes away beauty from the plot, the fly takes away something tangible, seeing how her aesthetic gratification none the less keeps the mysteries of the garden a secret and that what the fly scurries off with, busy, busy, busy, is likewise a mystery to her--in more direct language, less fussed with, less cloaked under a thick sheet of allusion.

This reads as if it were worked over much too long and too hard; neither the idea nor the images flow easily. Perhaps it was tweaked mercilessly in the rewriting, altered, pruned and substituted to make a clear idea seem opaque and hard to follow. The obscurity sound willful. This was not fun , it was not inspiring. Spaar has written better.
at May 29, 2011