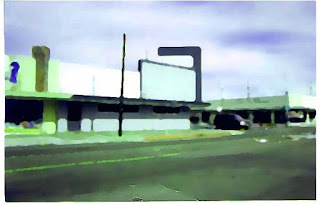 No fan of corporate America here, but I am sorry to see that Borders, the second largest book store chain in America , has filed for bankruptcy protection. While various press releases and emails from company flack catchers assure investors, creditors and customers that stores will remain open and that Borders will remain a presence nationally as both booksellers and community gathering places, the company has also released a list of stores it intends to close as part of their restructuring. That includes two in San Diego, including the one Downtown, where it's been my habit to shop or browse after a movie or dinner. I noticed that the store was getting over the last three years--the store seemed understaffed, sections were getting skimpier in their selection and were ill kept, and the  contrast between the number of people sitting on the floor with a stack of books they were reading to the amount of activity at the cashier station was striking. The cashiers were rarely busy simply because people were not buying. Borders had turned itself into something of a flop house, a deadbeat central, ground zero for broke layabouts. And now downtown San Diego is about to lose it's one major large bookstore; even with the assorted things that was irritating about Borders, it was still a place where you could get lost in the stacks and find something to engage the mind above and beyond the streaming banality that passes as culture. And now that is about to be removed. It might be said that DG Wills Books and Warwick's are my bookshops of first resort; the last ten books I've purchased during 2010 were at one or the other of these fine stores. But there was a time in recent memory where there were bookstores and record store...s you could shop as a means of balancing out the sheer accumulation of material goods. The point is that communities in a city are impoverished and are made less interesting because they lack bookstores, even corporate ones. One less bookstore to browse in means more time of a corporately enforced isolation, IE, more time in front of the computer ordering things on line, removed from the hubbub and clamour that makes a community more than a collection of houses built between intersections and strip malls.
at February 18, 2011