This tug has a kick 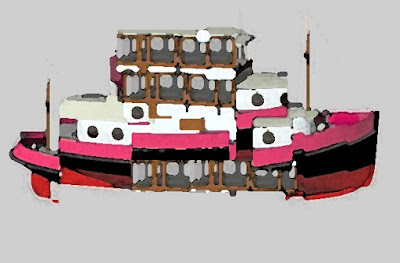 Tuggin' by Matt Miller goes for the second person voice, the use of you to indicate the protagonist, the effect being something like the over rated promise of 3D movies: you the reader are in the action, in the thick of things, all this swerving and snowing and wheezing about is you in action! The effect of 3D movies, in my experience, are headaches and nausea, and in the case of second person, at sustained length, monotony comes easily, a colorless, blurred, accelerated condition where the inability to get away from the skin of the re-surging "you" gives you the feeling of a first-person shooter video game.

Nothing comes into being until "you" see it and confront it, do something with it, and then walk away from it, with a narrator trying just a bit too hard to convince the reader that "you" have been changed, or encountered an irony that is , for the moment, invisible and not felt.

Tuggin' has the good graces of being short and not epic , and what we get is a breathless stream that has the magical , exhilarating feel of an excited witness recounting to the the protagonist just how incredible the previous adventure was.

Miller does interesting things with letting things bump into one another, step on each other's toes, of allowing one idea to intrude upon the other; there is the the feeling that there is only so much time to set the seen, establish the winter game in the cold snow, and to emphasise how fast the fun comes at you and how abruptly a tragedy can occur.

Then the steel-
hearted tug as the truck started up
again, as your shoulders yanked
to just short of snapping. And if
you held on, your time was up
as the driver fishtailed and cast
you across the covered concrete
to bury you in a six foot bank
of snow, everyone cackling, blood
electric, all the pieces of your face
inches away from the hydrant
you wouldn't see till spring.

Action, jerks of a truck, rules of the game, landing in a snow bank , just missing the unforgiving fire hydrant that other wise might have been unseen and out of mind until the spring thaw; this is a a lot of information to get across, and Miller writing seems something like a vivid slide show with quick witted captions underscoring both fun and the danger.

He does something else as well, with the simple mention of the fire hydrant, evoked in a Frost-like terseness; it's a perfect image to end on, some still life that's seasonal and scenic, suitable for a greeting card, but which also reflects back to the "you" that dominates the action; I sense a stunned realization that someone could have been seriously hurt, perhaps killed. Nicely done, effective, fast, visual.
at January 05, 2010