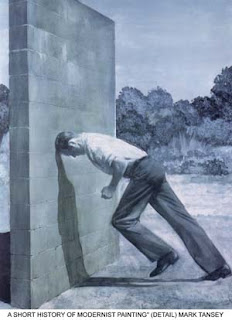 Truthfully, I had to walk away from a conversation in late December that rock and roll is was dead as a boot; Fifty somethings like myself have the feeling that last bit of authenticity ended as we came into our late twenties and had replaced avocations with careers. I’m just tired of anyone declaring whole art forms as “deceased” merely because they’ve gotten older; rock and roll seems healthy to me, as it goes, and however large a segment of the marketplace it holds , those who play it and those who listen to it, young and not so young, think the music is alive and, well, kicking ass. The complaints come down to this, The Fall from Grace; the Garden of Eden was so much nicer before the corporate snakes moved in and loused it up for everyone. Regardless of musical terms and pseudo terms that are tossed about like throw rugs over a lumpy assertion, is the kind of junior-college cafeteria table thumping that is demonstrably empty of content. Reading any good history of rock and roll music will have the music develop along side the growth of an industry that started recording and distributing increasingly diverse kinds of music in order to widen market shares. The hand of the business man, the soul of the capitalist machine has always been in and around the heart of rock and roll: every great rock and roll genius, every jazz master, each blues innovator has the basic human desire to get paid. Suffice to say that some we see as suffering poets whose travails avail them of images that deepen our sense of shared humanity see themselves still as human beings who require the means to pay for their needs and finance their wants, like the rest of us. There has always been a market place where the music is played, heard, bought and sold--and like everything in these last months, the marketplace has changed, become bigger, more diffuse with new music, and new technologies. Some of us are vaguely, and snottily mournful for an era when only the music mattered, and something inside me pines for that innocence as well, but innocence is the same currency as naïveté, and consciously arguing that the way I formerly perceived the world was the way it actually worked would be an exorcise in ignorance, as in the willful choice to ignore available facts that are contrary to a paradigm that's sinking into its loosely packed foundation. Again, it's hard to discern the line naysayers want to peruse, other than prove that he's an amateur Mencken, a pundit without platform, sans portfolio. It's my suspicion that for the typical young music listener now, this is the Eden they expect never to end, which means that it’s the best time in the world for rock and roll for some mass of folks out there.
at January 10, 2010

Email ThisBlogThis!Share to TwitterShare to FacebookShare to Pinterest
Labels: Music, rock and roll