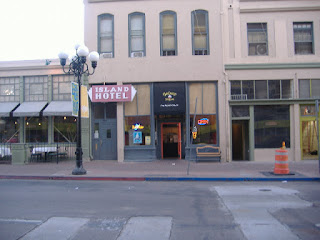 (I wrote about Charlotte Boulay's wonderful poem "planting daffodils" in 2008. I've re-read it recently, and lo, more remarks, not quite connected.--tb)
The larger evils are evident in the poem, yes, and the narrator does speak of them in the middle passage, preparing the bulbs for planting. The irony the poem contains is that despite the seeming devastation nature foists upon us and, seemingly, itself, is that new life is nearly always the result; volcano explosions, earthquakes, hurricanes, floods. What existed before is tossed aside, displaced,destroyed, but not discarded, as their seeming waste become the materials that make a new life possible. A diminished note in the poem is the suggestion that the vanity that we can control nature and change its function is an illusion that we have continually smashed. It is a lesson we refuse to learn, however, precisely because we have the curse of turning our strong feelings into world views and applied philosophies that often as not result in ironic ruin.


This is a strong poem, I think, and I don't think there's a false or strained remark or move anywhere in it. The language is unpretentious without being self-consciously barren as, say, David Mamet's or Paul Auster's poems can be, and her elisions , the pause and unspoken link between the imaginative (Juliet) and the material (the garden in fall) is done with just enough spacing to surprise a reader with the association. The connections between them are presented well--there's no sense in the images being overdressed for the occasion, so to speak--and I rather like the darker implication about human vanity being under-addressed, almost not at all, but implicit all the same. It gives you the effect of a delayed shock of recognition.It's wise of her to avoid as well the mention of Easter.This poem within the scope of what man imagines and what man must actually contend with. The context is broader and the inference is wider as a result, and the reader not interested in particular religious references aren't excluded . Boulay seeks a wider empathy.

The whole issue as to what makes for a "moving poem" is as subjective as what the best ice cream flavor is. The distinguishing these differences in taste are what makes discussing poems , at times, a great pleasure. As a poem, "planting daffodils" is a lyric , analogous to music, and there is something in the sound of the words and the spaces between the images they've formed that gives me a clue to several ideas that are tangible yet beneath the surface of what the poem describes; the art of what was almost said. This poem is a useful illustration of how our concepts of life and death are layered in sets of metaphors and analogies that contrast our routine lives with our idealizations, and warns, at the margins, that we will be surprised, shocked and saddened at the end if we think we've gained control of our fate beyond our final day.
at December 21, 2009