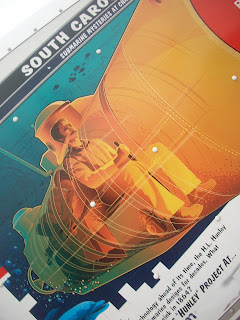 So many poems have come our way concerning people who are dead, dying , grievously ill or otherwise three-sheeted to states that lack a pulse. This would be depressing normally, but it 's interesting to witness how the writers manage to obfuscate , obscure and botch a subject. A sudden death is confusing and I understand the attempt to write one's way from a mire conflicting emotion, but there is , often times, only more confusion. Rather than being made aware of the experience in phrases that can unmistakeably convey emotion and irony that can occur in the midst of the psychic turmoil, we are only witnesses to someone's inarticulate graspings towards a verbal effect. It's wearying to come away from a poem convinced not by the by the sentiment , but only by certainity that the writer couldn't get across a difficult set of ideas. The problem maybe , at times, that the notions were still forming; even in an art where obvious meanings are not required, there still needs to be a tangible set of figures one has considered and crafted with which a plausible surrendering of disbelief is possible.As with the fallen who are being addressed, directly or by way of intensely crowded example, the poets who've braved the page and revealed their dedications don't appear eager to really discuss anything; imagery,allusion, archaic and grating coinages emerge and make the subject disappear under the weight of description, which may be the hidden strategy after all. There is nothing less than the creation of distance from the heated stew of unresolved tension; compare this event to other things and eventually the original idea is lost , not to return to our mind. For the time being at least...

Rosenthal's "Morophine", while not dealing with a fatality, prefers jumping from one image, metaphor, simile to the other instead of establishing a series of ideas through the imagery to bring us to a perception a reader would not otherwise have had. It begins nicely enough, concretely, but quickly and seeming to plan it is lost in a parade that seems less a poem than devices gone amok:

The window to this world opened again
as the drips slowed, and she became
whippy as a sheet of glass improperly
annealed, ready to smash at any
indefinite touch in a whining matrix
of stresses,the bed frame a museum box
where she lay, encased as a mummified
kestrel tailed with a fleece of fetid cloth
laid out by the mongoose (pharaoh's rat)
cradled in the nook of a dead arm,
and her eyes were intensified as soup
with beef bouillon and parsnip, potato,
celery ends, the candor of bread and butter
to swallow the fact of what happened.

Different ideas come to me, none related to what Rosenthal had in mind; I am thinking more of the Clampitts arriving in Beverly Hills in an old truck crammed with every gougedand dented piece of property they ever bought through the Sears Roebuck catalogue, the toys in many an old cartoon who come alive when the shopkeeper leaves for the night, a bargain table full of sundry used merchandise, slightly worn, marked down . The succession of metaphors is overdone, and the idea --that there is a human need,it appears, to numb and distance ourselves from the unfiltered sensations of both the worlds we have both in and outside our head, and that one desires to be delivered by means greater than themselves to an plateau where the material stuff matters not--is ironically mummified by Rosenthal's desire to make this brief verse vivid. This is a baroque diorama, a box of strained effects, without the lyric imperative. It's a noise maker only, static and crackle.
at December 19, 2009