Miracle Whip is Even More Caucasian than Mayonnaise 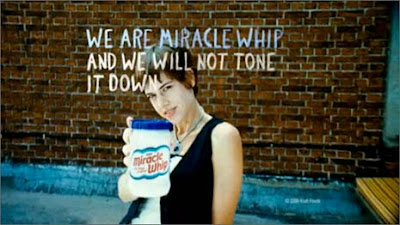 Mayonaisse gets a bad rap for being the blandest condiment one could put on a sandwich, which is unfair, I think, if only because I happen to like the creamy stuff on each and everyone of my baloney -dominated snacks. Bachelor living at it's finest, and a student's best friend. The further insult to the product , though, is that it's alternative spread is Miracle Whip, a yucky, nauseating, wretch inducing swirl of semi-sweet crud that makes one think of money shots, not satisfied appetites. It's not an appealing item to consider spreading over your cold cuts; it has a flavor that could make filet Mignon taste like K Rations. At best.
The makers of Miracle Whip are trying to counteract the disrepute the spread is held in with a new add meant to seduce hip, trashy, slacking and absolutely rudderless youth into thinking that this is the secret ingredient on which their life style and ethos rest. "We are Miracle Whip, and we will not tone it down" the add blares while an unfortunate punkette saunters toward the camera holding jar of the putrid stuff; perhaps their trying to equate Miracle Whip with energy drinks, boner pills, or doses of those drugs that make anyone who ingest the quantities into a babbling, inarticulate, free styling simpleton. I can't imagine anyone being convinced to go out and buy Miracle Whip based on this commercial. Corporations seem incapable of learning that they cannot make their products seem "hip"; hip, essentially a consumer defined essence, is determined by shoppers who find something appealing independent of the manufacturer's base claims. No one in the market place has ever suggested Miracle Whip is cooler than Kerouac or crack cocaine. At this point , after all this time, these ads are unlikely to fool anyone into thinking otherwise.
at September 09, 2009

Email ThisBlogThis!Share to TwitterShare to FacebookShare to Pinterest
Labels: advertising