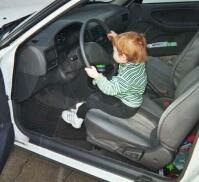 This is only a few paces removed from being a Hallmark greeting, but Michael McPhee's poem "To Read" is sweet and lightly likable . The metaphors are juxtaposed well , on balance, and what saves the comparison between picking up one's first book with an initial driving lesson is McPhee's delicate touch. This is an amusing, interesting effect that's constructed on the slimmest of plausible analogues, but there is a logic in the balance the poet maintains between what what he sees and what he associates with it.

He held the opened book
in both hands, at arm's length,

as if he were a student driver
practicing steering this Model ABC
that resisted his touch,
that he could tell he wouldn't know
how to control once it started,

not yet able to ease his grip
or surrender his frown
and learn to let the sentences unwind,
letting their momentum
carry him down the waiting road,

stopping and starting his way
into a world of words.

The awkward grasp on the book, the hesitant hands on the steering wheel, the slow, careful easing through the paragraphs, the lurching starts out of the driveway, the gathering of momentum as the plot thickens and the sentences take on more detail, the increasing convolutions of the streets and their patterns; in the brief space he allows himself McPhee draws up the parallels one's mastery of their language in written form and the growing skill as a driver. In both areas, one's technique becomes reflex. Personal style and flair are expressed while maintaining a knowledge of rules, limits, the need for restraint. McPhee remembers his lessons in restraint and preserves the essence of his idea; not a vehicle for an impressionistic essay nor an excuse for a confession, the poem is focused on the young reader, the fleeting, incidental analogy McPhee imagines. It is nearly a perfect crystallization of a hard to grasp perception.


The "reader" portion of this analogy has a strong sense of trepidation and adults, generally, don't have those kinds of fears when it comes to picking up a book and reading it. Children, though, especially those who are too old for board books, picture books or the sorts of books intended for toddlers, do, as a whole , enter come to more sophisticated writing with hesitation. The books they'll read will be nonfiction in large part, fact-based books, with that they will be expected to recall and remember what they've read. I sell children's books for a living and have talked to many teachers and parents about young children, resistant to a more difficult reading, and how their lesson plans are designed to ease through their resistance and value reading, in itself.


The leap to the driving lesson is meant to give us a sense that there are times in our lives when we must leave what's comfortable with and take the next step in our progress to becoming fully functional adults. I had the combination of anxiety and excitement as a teen when it was my turn to learn how to drive--I liked being driven everywhere I had to go , or mooching rides from friends who had their licenses, but there came a time I had to find my own way, with my own means. The analogy between the two, I think, are distinct, but cogently compared.

A simpler explanation might be to not get hung up over how old the unsteady reader is and appreciate the artful way McPhee accomplished verisimilitude in such a small instance. In both images, the unsure reader and the analogous new driver have somethings in common which the poet found a right-sized set of terms to bring to our attention; beyond that, I don't think the poem means much more than the particulars directly identified. Everything else, whether the reader is a young child or an adult with a reading problem , as zinya skillfully hypothesises, are things that are suggested, if not hinted at. Some of the best things we like in particular poems happens off stage, in a gathering of our own associations that enable our imagination to fulfill it's default function, to complete story lines and flesh out sketchy details. In that sense, each more detailed explication of the poem becomes, in a sense, autobiography.

There's a maxim I heard in school that I like, that a work of art isn't really finished until an audience, separate from the artist, experiences it and invests the object with meaning. . If there's something in McPhee's poem that makes some others think the reader is an adult, that works just fine, since it's a suggested texture that occurs independent of what the words claim is going on. A poem evokes ideas that are not in physical evidence.


It's an almost perfect poem. Nearly, that is, because the last couplet, "...stopping and starting his way / into the world of words" spoils the clarity of image and idea; McPhee starts to think at this point, tacking on something that is a tactical error among many a poet, that of summing up with a punchy conclusion. It does not fit the rest of this otherwise wonderfully spare poem, an abstraction that adds weight , not gravity. It's almost an editor sneaked this into the draft before it went to print, someone who just had add the phrase "world of words" in order to connect this piece with a more rigorous discourse being conducted elsewhere. The phrase, I think, is trite and hackneyed, and wonder why there was an impulse to clutter up a poem that was almost perfect.
at August 18, 2009