The Envy of the Dead 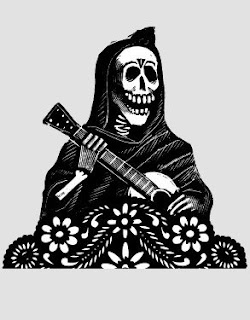 In one of his essays, Edgar Allen Poe summarizes one the essential elements of his philosophical musings by asserting that we are cursed with "the memory from before birth", a slight and wavering recall of a time when calm and serenity were in place and there was nothing of the distortions or crass money, family, or religion to make us nervous, devious, only half alive (if "alive" at all). The upshot of his baroque hypothesizing was, to be sure , our constant and at times overwhelming desire to return to such a nocturnal, darkened, stress-less state, a return to the womb, perhaps; in any event, his pining was a desire for sleep from which one needn't wake up from, death in other words.

Following suit are Poe's peculiar interest in things decadent and decaying, those thin , reedy and tubercular characters of diseased gentry and errant aristocratic stock who hang on to the waking life by a mere thread, effete and defeated and gracefully blended into the material realm, waiting for gravity to take its toll and to become themselves receivers of the dirt nap, freed of the binds that only punish you for having nerve endings.

There was, among the decadent writers and artists following Poe, a literal worship of an aesthetic principal that the greatest beauty was in a person or a thing in it's decline, when it was letting go of the struggle and was reduced to it's basic, most true and frailest form. An aspect of this, I suspect, was envy of the declining aesthetic object, be it a human or a diseased elm; a deep and permanent rest awaited them, and death would be that thing that gives the lie to the certitude of philosophy or economic determinism that insist that life must forever be thus, a certain way, without change. Those who die have escaped, and there are no arms to bring them back to suffer more with the rest of us pining over a grave.

Poet Patricia Traxler gets all this wonderfully, succinctly in her poem The Dead Are Not, published on line this week at Slate; the poem is brief and each finessed line conveys the complicated, conflicting and confused set of emotions one journeys through as yet another death comes closer to one's inner circle of confidants and family. The dead are not dead yet,

Always they take
their time, and we wait
politely, dreading
how real it will
have to be, sooner
or later, and at the
same time longing
to know that reality.

There are arguments one has with the departed, negotiations still in session, curses and protests of undying love are uttered, self-recrimination and blaming goes on for days and nights until one tires of the their tears and breathes easier because sunrises still come inspite the weight of grief. We mutter to ourselves that the dead are "in a better place", that they "felt no pain" or that
"...at least they died quick..." all so we get on with our lives and our responsibilities, and yet an echo of our accepting rhetoric stays with us as we shoulder our daily responsibilities, that "better place" doesn't sound so bad, and we become envious and petty all over again, we blame the dead for being cowards and laggards who would do anything to shirk their duty, and we come to envy them and that place they've gone. Gravity takes its toll, our bones ache, the mailbox is filled with bills, someone else you know has told you they have a fatal disease, your back hurts like shit:

Nights, as we reach
to switch off our bed lamps
and close our eyes,
we dare it to take us
into its mouth
that smells of tar,
saltwater, sludge,
take us up then let us
tumble endlessly,
blameless again
and helpless as any new life
forced out for the first time
into the terrible light.

Traxler gets to the center of that guilty little secret
at the core of grieving, the scourge of envy and the many faces and tones of voice it takes. Without metaphysical baloney, faux piety, or even a tone of anger, she writes in the cool, reflective calm of someone who has investigated their feelings and discovered an unknown fact about their thinking. This poem has the remarkable clarity of genuine self-sight, unnerving in its tone, beautifully expressed. Her skill gives us the chance to see something very private, unobscured by clouds of delusion. A very fine poem.
at August 19, 2009