We might as well say it, none of the “ism” terms stay in one ideological location—even with a prevailing idea that concepts and their definitions are fixed, there is incredible fluidity in how notions go off the reservation, so to speak “Modernism” proper has it's left and right wings, whether Bauhaus or Albert Speer, and it is important to note that a host of Modernist poetry’s early geniuses, Ezra Pound and Eliot in particular, were notably conservative and pugnaciously anti-Semitic. Part of bringing a revolutionizing the way we saw the world (with it in mind to change the world) meant, in the long wrong, in ridding the planet of particular ethnic groups who only diluted the clarity and brought falseness to the world. As the term "postmodernism" is used, in most instances, as a te 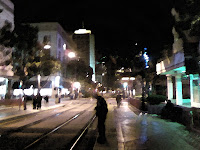 rm meant to describe the clusters of habits that characterize a current age against previous ones, it only makes perverted sense that the polarities intuitively use the same devices to achieve fear-driven agendas, rhetorical tweaking assumed. If I had to clue some one in as to what deconstruction is, I would step back from my usual shuffle about it being a type of extreme investigative process into the reliability of text to contain anything of the phenomenal world, and would instead point to the series of state and federal cases involving election results.

The American Left certainly wasn't afraid of offending political sensibilities while there was a war through which the ultimately unprovable historical determinism could be obscured by a conflict whose obscenity over rode local matters. But with the end of the war, the left here about receded to theory, unwilling, I think , to realize something fundamentally decent about Americans and their sense of fairness to the right cause, and it seemed to matter little to the intellectual elite to deal with practical matters of policy , county, state and federal.

The left, in general, became generalized in theory and law, and reduced everything to an eviscerated discourse of euphemistic speech that was not allowed to defile a sense of neutrality: things ceased to have names, only vague descriptions , and in this atmosphere any talk about identifying problems about what sickens the Nation became impossible . Rather than action to change social relations, real practice, a fight for change was reduced to a ideologically perplexed course in etiquette, the practice of which made humans confront each other in ways that were nervous, nervous, ultimately insane.

Email ThisBlogThis!Share to TwitterShare to FacebookShare to Pinterest
Labels: theory