notes on a poem by Sally Ball 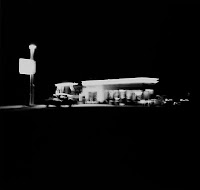 Landscape poetry, like landscaping painting, seems more for the interior designer in us rather than the reader wanting a surprise. Broad strokes, lively details, a spiritualization connecting the hard truth of -ceilinged sky and sered, flat land and the allusive calm of emptiness, all of it is in Sally Ball's poem "Visiting the Real Ranch" ;had she managed to give the poetry equivalent of an Edward Ruscha painting and written about that legitimately defies the reader to give it content that reinforces their city lives, fine, nothingness is always a state worth aspiring to, but poems need to use words that create tensions with other words and their meanings, and that tension can wed the contradictions in an intriguing state of undecideability.

Landscape and the things within it in and of themselves, doing nothing except being what they are, isolated from our perception. Ball has a desire to step beyond her perception, the shell of codification and the shield of contextualizing adjectives, and be, so to speak, just another item in and of itself, to enter the plain seen only by God and feel some of what He feels for the world he set in motion, but she is locked within her defining parameters. Language is intended to help us define and mold experience and to create cultures and institutions where perception is given over to producing technology that is both glory and ruin. It exists to empower the species to go forth and multiply, casting the world as something to be conquered, tamed, harvested, mined, exploited for resources; it is not a quality that makes "letting it be" easily accomplished. One can also take a page from Derrida with his remark insisting, to paraphrase the source, that one cannot step outside language to get at those things that language imbues with significance. The attempt to use language to describe what is beyond the hegemonic grip of our refurbished metaphors produces, finally, only more refurbished metaphors. So the narrator sighs after an initial stanza describing high sky, mountains, desert curs marking their territory and plays the god card with a heavy hand, heavy as in clumsy, not profound.

I hope you get to live somewhere like this,
so much yourself you could take charge
of such a solid stand of hills,
you could receive this holy light,
keen and fleeting.

At every moment the valley brimming,
the valley empty.

—Though you are nearly always happy,
and this place does not seem happy.

The one wish, it is my one wish.

I don't think it's a far reach to speculate as to a narrator wanting to get closer to what God thinks or feels from reading this poem. Ball did use the phrase "... this holy light,keen and fleeting..." and it's clear that there's a spiritual essence she desires for the person she's addressing, that he could in turn acquire bit of that "keen and fleeting" sensation she apparently received through communing with this country side. To her credit, the mention of anything of supernatural origin is brief, but it's there all the same and is worth bringing up in an interpretation.

I'm less concerned with the Biblical insistence that we be guardians, protectors and preservers of the planet than I am with Ball's attempt to describe a situated feeling outside the boundaries of language that are, though malleable , geared to keep our ideas reasonable distanced from anarchic impulse and also to make new contexts cohere with what has gone before. I do think that poets, painters, film makers, maids and all the rest of us are, at times, touched, blessed and moved by something defying our linguistic resources, and at times I think we are convincingly when we attempt to express it. Ball falters, I think, ruined, I think, by the insertion of Oscar, whom she wishes could be in this terrain and witness the fleet, keening holy light she craves; it seems a bit smug to me, and it the problem is that we have yet another poet naming themselves as the center of a poem that would be a stronger work had his or presence not been established.
The actual meaning of Genesis is right and righteous, but that's not what I'm talking about, but rather that language on our species' level of development and subtlety is a tool, and it is the nature of tools to be used to make things happen, to build things, to change , to mold, to spend.

Edward Ruscha contended no less with metaphorical traps than does a poet seeking a fresh perspective or many on an old set of ideas, but he paints images and seems better poised to deal with the zen (or existential) truths of things in existence absent an ego to round them out; his juxtaposition of odd elements that contradiction with one another, such as his series of canvases that feature single words hovering over richly muted colors capes , deflect the claim of obvious intent and successfully give you something to think about; the mind insists on making what it sees make sense,and this the sporting good of any art worth more than mere amusement or cosigning a personal code of empty gestures.
Better, I think, that Ball would have taken something the Imagist book and rid the poem of anything within the lines that acted as a reminder to the reader that this were her exclusive perception. That this is about her presence is implied strongly by the writing , which would have been more evocative and stirring, I think, had she focused on the direct treatment of the thing under inspection, being witnessed, instead of marking the territory around her vision. She could well have included the missive to the absent Oscar without addressing him directly; it makes the piece didactic and not an unblemished expression of an experience. This is a poem, finally, that would likely have benefited from having another watchful eye read; perhaps someone would have remarked on what needed to be trimmed, condensed,made purer.
Better still if Ball said less, implied less, wished less for some other person, as it conveys the impossibility of cataloguing the genuinely indescribable. The urge to tell us what it all should add up to only puts her deeper in the sand trap she was trying to escape from.
at July 19, 2009