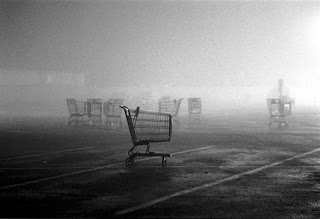 Preston Sturgis did something brilliant with his film "Sullivan's Travels", a satire in which a socially conscious Hollywood director pretends to be a hobo so that he can meet and learn about real poor people and their struggles. His aim was to get a feeling of the down trodden masses for his next movie, "Oh Brother Where Art Thou" (claimed decades later by the Coen Brothers). In his journey he is arrested, tried and sentenced to work on a chain gang, where he suffers the brutalizing effects of Southern justice. One night the prisoners are herded into the mess hall where they are going to be shown a film, a cartoon, and during the animated slapstick, these weary, tragic faced men burst into boisterous laughter, belly laughs, guffaws, the whole shot. The director discovered the great truth about what an audience wants and needs, which is entertainment, diversion, a distraction from the crushing sameness of their lives. Sturgis, though, was a cynic even with this conclusion and offered up the idea that art is, after, quite useless when it comes to teaching us anything about the human condition. He's in full agreement with Oscar Wilde, in his preface to his novel The Picture of Dorian Gray:

The artist is the creator of beautiful things. To reveal art and to conceal the artist is art's aim.
The critic is he who can translate into another manner or a new material his impression of beautiful things.
The highest as the lowest form of criticism is a mode of autobiography. Those who find ugly meanings in beautiful things are corrupt without being charming.
This is a fault.
Those who find beautiful meanings in beautiful things are the cultivated. For these there is hope.
They are the elect to whom beautiful things mean only beauty.
There is no such thing as a moral or an immoral book. Books are well written, or badly written.
That is all.
The nineteenth century dislike of realism is the rage of Caliban seeing his own face in a glass.
The nineteenth century dislike of romanticism is the rage of Caliban not seeing his own face in a glass.
The moral life of man forms part of the subject-matter of the artist, but the morality of art consists in the perfect use of an imperfect medium. No artist desires to prove anything. Even things that are true can be proved.
No artist has ethical sympathies.
An ethical sympathy in an artist is an unpardonable mannerism of style. No artist is ever morbid. The artist can express everything.
Thought and language are to the artist instruments of an art.
Vice and virtue are to the artist materials for an art.
From the point of view of form, the type of all the arts is the art of the musician.
From the point of view of feeling, the actor's craft is the type.
All art is at once surface and symbol.
Those who go beneath the surface do so at their peril.
Those who read the symbol do so at their peril.
It is the spectator, and not life, that art really mirrors.
Diversity of opinion about a work of art shows that the work is new, complex, and vital.
When critics disagree, the artist is in accord with himself.
We can forgive a man for making a useful thing as long as he does not admire it. The only excuse for making a useless thing is that one admires it intensely.
All art is quite useless.

Ought you cease being an art maker if you agree with the most over-cited remark the manifesto, “all art is quite useless”? It doesn't have to be either/or in this matter. Wilde's idea that "all art is useless" is something I wouldn't agree with, in the broadest sense, but I do see the worth of his remarks in a subtler application: that the quality of art does not, of itself, ennoble a person, but rather the quality of the personality that selects or creates the art he or she surrounds them self with. As to ceasing to write on principle if I happened to agree with the literal thrust of Wilde's statement, of course not. Wilde was a decadent, an aesthete influenced by a 19th century French modernism that rejected the moral didacticism and instructive lessons much art was glutted with during the period and preferred, instead, an "art for art's sake". The point of art, both in making it and putting oneself in proximity to it, was to appeal to the emotional, the intuitive, the irrational, to achieve "a derangement of the senses", as Rimbaud declared. I'm against any reductionist notions declaring that art is required to do one thing or the other so far as intents and goals by default--the validity of any theory of art is in how well individual art and artists achieve their ends--but according to Wilde's aesthetic philosophy I should keep on writing, for it's own sake, because it brings me pleasure. It could also be the latent Calvinist in me, usurping my Irish Catholic guilt with heavier doses of theological dread: I write to keep busy, to occupy myself in activity so neither mind nor body are idle and wasting away with nothing but bed sores to show for my time. That's more fear based than Wilde was thinking of, but it coheres with the main point, that art, as process, is it's own reward. One needs to reconsider the idea of "reward", though.
at May 07, 2009