Bukowski: Born Into This on DVD, a documentary on the writer by John Dullaghan demonstrate why fans should be leery of meeting a writing hero, especially if said writer specializes in writing about boozing, whoring, bad jobs, pain, despair, bad luck and bad faith: fairly soon the charm of the man falls away during the classic interviews collected here, and we're given a grim picture of an irritating and maddening personality who could do one thing well, which was to write about his life long fuck ups and regrets. Bukowski's writing was limited and his books are something a reader wanders from after an infatuation of the one-trick genius,but the film leaves you with the feeling that way he wrote about the world he knew was singular and will survive many coming trends and fads in writing life.I'd never say that Bukowski was without art or the transcedent grace of the true poet.Lew Welch said you don't write unless you can't do anything else, and in that sense I suppose suppose the one thing the man could do was understand his pain to it's sharpest , needle point jab and then to tell the truth of it all in a voice that was undecorated and splintered. There is beauty in his verse, but his scope was so narrow that I fear over the years he began to write poems and tales according to what he knew were audience expectations. It's an over cited quote from Frederich Engles, but it bares repeating here; quantity diminishes quality. The poems , I think, were a bit too easy for him to compose on the fly, and this is why I think Bukowski's lasting contribution to American letters is his fiction, especially Post Office, Ham on Rye and Hollywood. Fiction is harder to write, and the world of Henry Chinasky, as Buk imagined it, avoids the easy outs the later poems are won't to have. 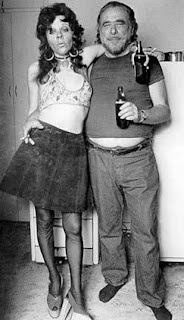 For hard core fans only , perhaps, but worth catching or getting on DVD. There was something as touching as revealing about the scene where the monster inside him bubbles up while he's sparring with his wife.It's doubly moving when you recognize Buk's flair ups of rage and aggression from your own experience, if you happen have a back ground involving more-or-less alcohol consumption; it's the urge to destroy everything that's important in one's life, to drive off anyone that cares about you because under all the bravado and gallows humor lurks profound self-loathing that will manifest itself at exactly the wrong moment. Not that there's anyone good moment for booze-fueled flare ups to occur. Writing seemed the one thing that was unconditional in his life, and it is the one thing that kept him either blowing his head off or killing someone else. The rare , black and white footage in the movie was amazing, and it was appropiate to open the film with Buk at the Poet's Theater in San Francisco, puking his guts out before going on stage to read to a packed auditorium. The footage I thought was effective was Buk driving his VW bug, taking his interviewer of the mean streets he roamed. Favorite moment: Buk is going off one anecdote/philosophical tangent when a siren drowns him out. Buk falls silent, the camera captures an ambulence speeding past them, cutting through the traffic to some life and death situation, and then Buk resumes his story as the siren fades, not missing a beat. A perfect counterpoint. I thought Barfly was a blown opportunity, mostly due to Micky Rourke's cryptic stylization of the Bukowskiesque protagonist, who seemed to stuck somewhere between an SNL-quality impersonation of Brando's Godfather performance and DeNiro's habitual screw up in Mean Streets. Faye Dunnaway was a revelation, though, giving a performance that didn't need to be propped up by some by-gone idea of glamour. She did well with the film's tone of washed out naturalism.

One thing that I'm grateful to Buk for is his convincing Black Sparrow publisher John Martin to reprint the novels and stories of John Fante. Fante seems to be the biggest influence on him as a writer, and after reading several of his books-- Ask the Dust, 1933 Was a Bad Year, Brotherhood of the Grape, Wait Until Spring Bandini-- I'm firm in my opinion that Fante is the better writer. A better prose style, a funnier sense of humor, a hardboiled lyricism that rivals the best flights of Chandler. The republication of his body of work, I think, was a significant restoration to the American canon. Fante was a writer of the Last Stand ,
of flawed yet ambitious men advancing toward vainglorious dreams despite repeated wounds to their romantic, out sized egos. What gives Fante his edge is his refusal to soften the blows as he writes about the vanities and fuck ups of instinct driven men;
the hurt is palpable, the humor is deadly, the situations believably human.
at May 09, 2009