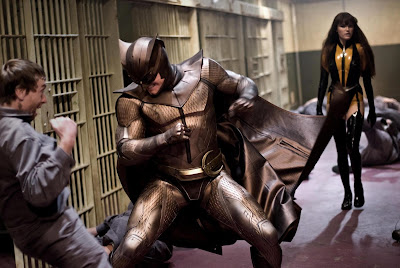 I  thought of comparing Watchmen with Francis Coppola's epic Vietnam War film Apocalypse Now as an example of another expensive , ambitious film that combines botched ambition with a compelling visual style, but I gave up that notion after thinking it through for a couple of days. It would have been unfair to Coppola's troubled saga; since it's 1979 release, I've seen the film at least six times that I remember. Vague, grandiose and over long the film might be , and as problematic as Marlon Brando's performance as Col.Kurtz remains, you can still study the metaphors and allegories director and co writer Coppola was using from his source material, Joseph Conrad's Heart of Darkness; one does pick up on the notion of how an individual (or a culture) can drive itself to an obsessed pathology , and the images from the voyage up the river create a sustained feeling of a contracting world view. The paranoia is vivid, felt; fail as he might in revealing what "The Horror" is at the heart of this simple fable is, Apocalypse Now manages, none the less, to creative a diffuse poetry from the symptoms. Watchmen,  is well beyond the symptoms and focus's on the wounds and, sadly, fatally, has characters lecturing each other on the way things ought to be. For all it's flash and form, Watchmen is a grandiose, bombastic bore. The audience seems to think so to as well. It's not a film I care to see again short of being paid to do so.

The big reason Watchmen tanked so badly was because the film was, after all, structurally incoherent. Not all the blame can be laid on Zack Snyder, since it seems to me that Warner Brothers, eager to trump competitor Marvel at the box office, went for what they considered their sexiest comic book property for screen adaptation. Any honest fan boy or gal would have told you that Alan Moore's original novel wasn't the likeliest item to made into a movie; Hollywood movies have an aesthetic and style that demands a far simpler storyline and shorter running time , and the original novel , with it's layered story lines, post modern feints and it's intangible blend of physics, history and philosophical axioms, was weighty with an ambition that is contrary to a visual medium.

Even with the substance of the novel slashed back considerably, there was still too much for director Snyder to have to contend with; even at the barest representation, there were a gross too many characters who's back stories had to be presented at inconvenient intervals in the action; Snyder tries to compensate for all this an admittedly brilliant look and repulsively violence, but even these outbreaks of gruesome mayhem could not deflate the mulled over glumness of the of monologues and voice overs. The viewers, hoping this enterprise would gel at some point, had to instead sit through nearly three hours of what came down to repeated doses of this one-two combination: TALK TALK TALK TALK TALK /MURDER MAIM SMASH GOUGE DISEMBOWEL.

Snyder had worked some magic with his historical deconstruction in his film 300; his choice of style and fantasy over factual matters was justified by a confident bravado. The excitement from that film was aided, I would assert, by a simpler story line, a better idea of what the conflicts were leading up to; he was able to re-vitalize a moldy collection of cliches from the cultural common stock concerning valor,bravery, loyalty. With Watchmen he tries , bravely I think, to reinvigorate a higher class of cliches, the sort of received notions one finds on the floors of University Department offices, and finds himself overwhelmed. The source of those cliches, the original graphic novel , itself an over rated expanse otherwise smart folks have attempted to jump categories and insert into the New Western Canon, is a property that would have smacked any bright lens man to the ground.
at March 25, 2009