The End of Verse? Again??

Newsweek has a piece about a the results of a report from The National Endowment for the Arts that was a mix of good news and bad news for those concerned with the national reading habit; people were reading more , with increases in fiction and non fiction alike, but we were, collectively , reading less poetry. The article takes the usual dooming sensationalist 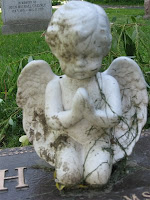 slant with the article's title, The End of Verse?People love to read about funerals, I guess, or the cultural echo of re-runs have truly colonized our attention spans. This is the same used car with a new coat of paint.

There is a long history of poets and critics declaring poetry is something completely other than prose, a separate art approximating a form of meta-writing that penetrates the circumscribed certainties of words and makes them work harder, in service to imagination, to reveal the ambiguity that is at the center of a literate population's perception. An elitist art, in other words, that by the sort of linguistic magic the poet generates sharpens the reader's wits; it would be interesting if someone conducted a study of the spread of manifestos , from competing schools of writing, left and right, over the last couple hundred of years and see if there is connecting insistence at the heart of the respective arguments .

What they'd find among other things, I think, is a general wish to liberate the slumbering population from the doldrums of generic narrative formulation and bring them to a higher, sharper, more crystalline understanding of the elusive quality of Truth; part of what makes poetry interesting is not just the actual verse interesting (and less interesting ) poets produce, but also their rationale as to why they concern themselves with making words do oddly rhythmic things. Each poet who is any good and each poet who is miserable as an artists remains, by nature, didactic ,chatty, and narcissistic to the degree that , as a species , they are convinced that their ability to turn a memorable ( or at least striking phrase) is a key with which others may unlock Blake's Doors of Perception.

The lecturing component is only as interesting as good as the individual writer can be--not all word slingers have equal access to solid ideas or an intriguing grasp on innovative language--but the majority of readers don't want to be edified. They prefer entertainment to enlightenment six and half days out of the week, devouring Oprah book club recommendations at an even clip; the impulse with book buyers is distraction, a diversion from the noise of he world. Poetry, even the clearest and most conventional of verse , is seen as only putting one deeper into the insoluble tangle of experience. Not that it's a bad thing, by default, to be distracted, as I love my super hero movies and shoot 'em ups rather than movies with subtitles, and I don't think it's an awful thing for poetry to have a small audience. In fact, I wouldn't mind at all if all the money spent on trying to expand the audience were spent on more modest presentations. The audience is small, so what has changed?
at March 27, 2009