MAN IN THE DARK: Paul Auster takes a nap 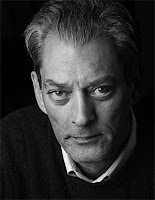 Paul Auster desires to be a cross between Don DeLillo and Borges, which is to say that he desires the cool surface of the DeLillo's beaut fully managed tone and Borges genius for making the inane become suffused with an nether worldly sublimity. It works , at times, as in the novels that comprise the "New York Trilogy", his novel "Leviathan" and more recently his masterpiece from a few years back "Book of Illusion"; the way he uses the element of chance in his narratives can at times be one of the keener miracles of American writing. Auster, though, is a man of limited style and a set of ideas that have very nearly played themselves out, as we see here in "Man in the Dark". A small-time professor and book reviewer , recovering at his daughter's house after a horrific auto accident, spends much of his time watching movies and lying in the dark, imagining movies of his own, in this case a narrative of an alternative America that is being torn apart by a civil war. The elements here get very convoluted, and those familiar with Auster's favorite devices will sense the writer just a shade bored with his inventions and his borrowings.What you could see coming up in this tale was the eventuality that somehow this man in the dark, the imagining invalid, will have to confront the protagonist of the very tale he's concocting as he lies there. Tension is supposed to start here, the twist is supposed to make the skin tighten and the fingers eagerly seek the next page, but these are conventional turns in an Auster manuscript. When he's taken with a set of ideas, he can make incredible coincidences believably take a reader on a trek launched by sheer caprice. Man in the Dark's action seems engineered at best. The spare, evocative style that is the writer's trademark hardly rises above a monotone. Narratives, real and imagined, twine together in such a way that we're supposed to ask which is real and what his false until we are brought to a relief, although the only relief to be had here is not from the novel's building tension, which is slack, but from the tedium that ensues. That's a feet for a book that isn't even two hundred pages long. I was a bit disappointed by this novel, less for witnessing the decline of someone who was once a reliable provocative writer and more because he repeats his good ideas here without grace, snap , or variation worth noting. This was the draft you're supposed to throw away,not submit to your publisher.
at March 27, 2009