By Ted Burke
Writing at Salon.com, Louis Bayard turns in a cute piece defending that barnyard stinker Scarface, mustering up what reads like a strained enthusiasm for that movie's grinding, loud and bloody imposition on the senses. It's perfectly fine to find something interesting to talk about in films that otherwise stink on ice, such as the controlled formalism King Vidor gives to the Ayn Rand's proto-fascist film version of her novel The Fountainhead; the ridiculous politics and Vidor's visual elegance make the film watchable , not a little campy. It's a quality worth commenting on further. Bad is bad, though, and Bayard's love of the egregious Brian DePalma film cannot quite get out of the drive way.

It's an old space-filling trick for a pop culture wonk to take up the case of a commonly derided example of mass-art and argue the hidden or forgotten virtues therein. Lester Bangs was brilliant at inverting commonplace complaints and making the case for bands who would otherwise be swept off the historical stage, and time has shown that he was right as often as not, noticeable in his early raves for Iggy and the Stooges and the MC-5. But the trick is a stock ploy now, and the reversals of fortune have become a splintered, ossified rhetoric, and this defense of Scarface doesn't carry the weight to make what has to be Brian DePalma's most elephantine,graceless, absurdly baroque film into anything resembling a watchable entertainment.

Even the fabled violence and allegedly "operatic" style, over the top as they are, no longer , if they ever did, jolt, shock or make us consider the effects of mayhem on the viewer, nor does it make us contemplate the nature of violence in American culture at large. All the other virtues, as intrinsic critiques of American greed,the cult of the individual, the flesh-eating glee of unconstrained capitalism, are all there, surely,but these elements are less examinations of causes of real world ills than they are pretexts for the leaden DePalma show piece stylistics where he see the director , again, mashing together camera strategies he's lifted from directors who work with a steadier hands. Steady DePalma isn't, and Scarface drags and seems interminable despite it's reputation for vulgarity and grizzly gun play.

It just goes on and on and on still until the sheer tedious weight of the thing mashes you into the seat. One might say something of Al Pacino's flame-throwing performance of Tony Montana, and here it is; even Oscar Winners can be wretched when left to their own devices, and Pacino without a good director or a decent script might as well be an antsy house cat clawing up the furniture.
________________

A buddy dropped me an email to remark that he'd re watched Last Tango in Paris after thirty years of staying away from it; he said the found it dull as wet lint, and that Marlon Brando's baroque mannerisms seemed over the top and under considered. It was a drag, he said.I'm inclined to agree.I saw the movie in the Seventies and I went along with most everyone else who desperately wanted Brando to reclaim his genius; while what he did in Last Tango remains interesting and brilliant in it's peculiarity, his performance, as we discussed, has little to do with acting. 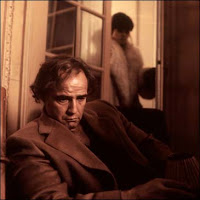 He appeared more intent on destroying the craft of film acting than anything else--what he produces is that ugly thing that is none the less unique in its distortion. You cannot avert your gaze.

Or at least the kind of acting that works well in a decent film we can recommend without having to qualify with clichés we nicked from New York film critics. I look at his work here as some kind of proto-performance art primitivism, a conscious projection of an unchain Id. The film, when I tried to watch it again several years ago, was awful, dull and pretentious in ways that are absolutely offensive. All this self-loathing seems an easy guise to assume when you’re compensating for a lack of sympathetic characters or coherent circumstances.

Here’s my obligatory Mailer self reference; some wag had mentioned that it was impossible to write about sex in a boring way until Norman Mailer came around. Bertolucci seemed intent to making a sex movie that was infinitely more tedious than your average porn-belt stroker.