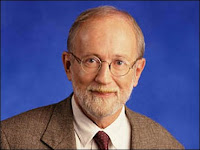 What a sad day to note the passing of critic John Leonard, and what a delight to read Laura Miller's description of the good critic's prose style as "cascades". Indeed, it was his style that brought me to Leonard, the way his sentences would knowingly roam from nominal book or television reviews and would turn into parsings, investigations , deconstructions and re-assemblages of embedded in a given narrative.
Leonard's value as a critic was that he was able to sift through the generic structure of pop culture and find the motivating idea that fired up a writer's passion and informed his cadences, and he was aware as well of how the problematic nature of the venturing hero not just contending with foes and countervailing forces, but with his own vanity and doubt, elements likely as not to distract him and produce an an agonizing, satisfying drama.

He was a master of grasping what novelists were getting at--his writings on DeLillo, particularly his long piece on Underworld gathered in the essay collection When The Kissing Had to Stop , skips the postmodernist lexicon of murk and defeated deferment and instead clearly, precisely, effectively articulates DeLillo's theme and investigation of characters desiring a concrete cosmology and metaphysical certainty who yet have the dreaded sensations that everything they know is shifting, changing in quality , that their storylines now contain voices they cannot understand. Leonard, a poet himself, is among the few who went beyond the typical praise for DeLillo's prose and instead got to the poetry of it; he got to the concentric center of DeLillo's fictions.Don DeLillo benefited greatly by having a reader as probing and brilliant as Leonard, as did the readers of his reviews. I am sad this master of the critical craft is now silent.