Revenge of the Lawn 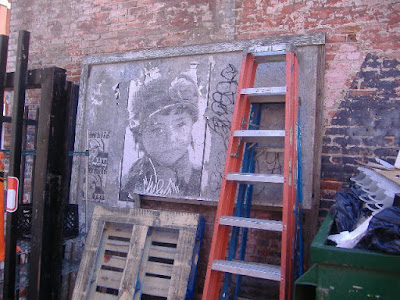 Odes to Spring are usually those bits and ditties where the earth is celebrated for the miracle of life itself, that despite what turmoil one is confronted with, fresh starts can always be had. It is one of the persistent cliches of literature, I suppose, but there is always room for another take that is less hopeful, downright depressed in fact, as one can read in Joseph Campana's poem "Spring Comes to Ohio", featured this week at Slate. It doesn't work as a poem for my taste--it seems more of a stream of conscious ramble from a novel when an author artfully enters a character's interior life-- but it does give a sense from a young man's point of view as to how the sunny and the colorful can excite an urge for violence.
This is a poem of submerged, sublimated, passively enacted revenge against the sunnier season that makes the world thaw from it's hard, icy encasements and to bloom and become green under a nurturing, breezy air. One is invited to inspect the world one had known as grey and cold and to see what was buried under all those layers of ice and slush; seeds grow and produce flowers, lawns grow and become long and green.

But one thing conflates into the other and some disguised hurt associates the sunny disposition, the natural activity of nature renewing it's life cycle with an awakening of some trauma that had been inert, hibernating. There is the feeling in the description of this skewed landscape of someone gritting their teeth while they pull the stitches from a recently mended wound

All the evening flowers
are coffins bursting with
possibility. Why not pick
one, why not let your
sorrow sink into the dirt
where it will die? The first
gesture is the hope that it
will die before you will
or that you will learn to
read it like a book. Come
read, come to the flower
beds and the mowed-down
fields where the heads of
yellow soldiers burst in
the grass. If anyone ever
gave you something, that
gesture of fading beauty
was the first sign that
the price of generosity
is the flower that would
rather not be ripped from
its heart

Young boys are flowers and flowers are things that are planted in place and at the mercy of whatever rogue set of fingertips chooses to pick them at random , and with the author adroitly altering the point of view to simulate a child's reality-bending fantasy. Dandelions are soldiers being vanquished brutally with a decapitating lawn mower; the violence is senseless, the very things that we are invited to inspect, to read remain secrets only a skilled therapist can interpret and disarm. But the meaning of it seems clear enough, which is that the world, in the traumatized narrator's view, is a series of layered appearances, one hiding a secret, power thing or fact, with the reward being only pain and punishment for the curious.

Come read your heart
which has shriveled
into a flower receding
before night. If the sun
ever will come back here
the first thing you'll do is
reach right out to touch

This poem sees the seasons as a serial sucker punch, winter is the time when betrayals, fights and other states of disagreeable experience are put in stasis and the young man return to their homes to nurse their wounds, shore up their psychic armor, prepare for the coming thaw; when the thaw comes, the pain starts anew, one may fall for the old trick again and experience the stabbing sensation of recollection. Something primal kicks in, aggression grows that becomes a lifetime habit. The reflex is that this life exists only to torment us, and one must proceed with a determination to carve it up, engrave one's name on the soil, to have the planet yield to one's will or be devastated.