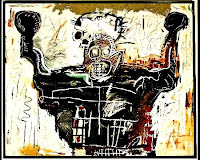 Metallica drummer Lars Ulrich, a capitalist despite his band's tendency to dwell at the edgier margins of anxiety resulting from living a life in a faceless corporate society, has decided to place his Jean- Michel Basquiat painting "Untitled(Boxer)" up for sale at Christie's auction house. Not surprising for a millionaire rebel who sued the original free-download version of Napster for allowing Metallica's albums to be gathered by poachers without a dime of remuneration; art is about more than making a living, it's about making a profit. He says that his art collecting has now gone in the direction of gather emerging artists, which is fine, though I'd be more impressed if he just said that was tired of looking at an ugly canvas.The thing about ugly objects that one has paid alot of money form is that as much as one pretends to love their purchase, said objects don't love you back. Yes, the painting is powerful and emotionally wrenching to witness, but so is a car accident; it's not an experience I try to recreate. Had I the funds to hang some paint-brushed screaming against on my wall, I'd opt for the late British artist Francis Bacon; his human subjects , in the way they seem to be morph from

classically defined features to a blurring, bleeding dissolution are more the stuff of art than are Basquiat's kvetching stick figures.

I've been reading a rather lavish and well-tuned book on the late artist Jean-Michel Basquiat, Basquiat, edited by Marc Mayer, rich in selection from the painter's brief career. All the same reactions and responses arise, the combination of rank amateurism and visionary determination, broom remains and waste basket scrawls combined with an idealized sense of tribal totem ism that nearly excuses Basquiat's failings as a draftsman. 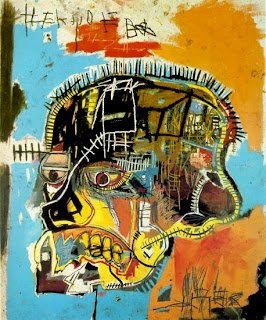 The late Jean- Michel Basquiat's best trick in his short ascendancy as a painter was that he managed a fusion of street credibility and the gloss of high culture faster and more authentically than did his formally trained mentors. His mentors and inspirations Warhol, Schnabel, DuBuffet and Twombly , among many others, learned the traditions and the techniques of Western Art History in order to undercut them with the cranky, jazzy, electric vibe and artifacts of contemporary urban life. The aim overall was to blur, if not completely destroy the line between a culture's high art practice and accompanying aesthetic and the reality it was created in. Beauty, harmony, balance, and revelations of essential Truths about the Human Spirit were not the motivations for an art created in bombed out neighborhoods and abandoned factory lofts. It was praxis , an applied theory of revolution.Basquiat had no theory other than his instinct for what happened to fit his moment of composition and was interested less in fusion of cultural arrogance than in things he saw that he could use in his work. It definitely was a Hip Hop art, not unrelated to the DJs spinning the music of others in endless mixes, speeds and pitches and speeds to produce something completely new and in the moment. Basquiat appropriated their mannerisms, their studied sense of the incomplete and canvases that are "under construction", and effortlessly, it seem, applied it a graffiti style that was suited for the sides of buildings and freeway overpasses, not gallery walls.

I was never a big fan of Basquiat's paintings, and the praise he's received is , as is the estimation of artists, musicians and or writers who die young, is overblown and overstated. The body of work does not support the complexities ascribed to it; it's more a grand case of reading things into works rather than drawing things from them. Everyone loves a young, beautiful and dead artist if for no reason other than it's a handy way to keep our tenuous definitions and tropes of genius, beauty and justice ( of a kind) in place.

If we may say that someone of a particular gift passed on too young but left evidence of the best expression that the race is capable of, things that live beyond their life, we can maintain our certainties a little longer. The metaphysics of presence is shored up until the next crisis of global conceptualization.

Basquiat's work, though, has a charm that is anything but phony; he has the hallmarks of what is called "outsider" art , or "naive expressionism", the art making of the sensitive but untrained and unprofessional whose awkwardness of line and contour is something genuine in mass culture. It is an interesting display of artists thinking about the world that's given them to draw their energies and phobias from. Basquiat hit the payday, of course, but the faith of graffiti remained at the center of his paintings, which is to say that his bright and garish forms and highlights weren't make the city any prettier or revitalize old notions of harmony.

Rather,it was a way of making the city right-sized, not decoration but instead a note that says that this where he lives, this is what he has passed through, and this location of every nuanced joy and agony a life in Manhattan can give you.
at October 12, 2008