Billy Collins writes poems that are literate, elegant, artfully crafted, and utterly coherent in the point he wants to get across , the feeling he want to evoke, the irony he wants to convey, and his ability to achieve all this in successive books in equally successive poems is both the attraction to his writing and what bores me silly. His new book, "Ballistics", is the writing of someone who wants to take the starch out of the image of poets and the willfully abstruse poems they compose. Rather, he pulls back the curtain and lets you see the process. Often enough he'll set up the scene, paint a picture, and then address the reader directly, aware that he writes verse that will be read by thousands of book buyers, and includes them in on the joke.

This is charming , of course, and one admires the grace with which Collins writes his lines--a better balanced set of free verse I've never seen, really--but for all the pleasure he provides for the painless duration of his poems and the usually flawless what-the-!@@1 surprises he offers up for the final stanza, a formulaic tedium sets in. Disguised as the essence might is, there are trace elements of journalistic efficiency here ; one notes the style, the arranging of details, how the poems start with an announcement of the poet beginning his day futzing around the house, walking into rooms, staring out the window, 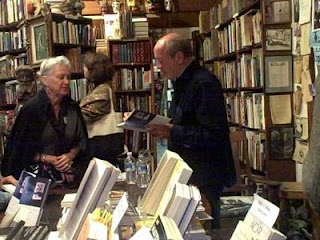 and then the intruding thought that distracts and manages to make the banal yet telling details of his home life and his community take on a more somber (or alternately, a giddier ) tone, a final, spare description of an item that eludes the metaphorical devices he's deployed, and then the twist, the coda, the pay off that makes you go ahhhh
as though his poems were nothing more than a fast swig from a cold soda. There is so little range to Collins' work that one thinks of a world stuck in one of those Mobius Strips MC Escher was wont to draw compulsively.


Collins writes poems about poetry, especially about the poet in the act of seeing something of the world as if for the first time, certainly as though a veneer had been stripped away and there was Truth Laid Bare, just the essentials of things and activities in themselves with their invisible ironies and vague meloncholies. So much of this is larded with self mystification that Collins, a wise cracker at heart, cannot help but but mock the poet as as lait priest; he gives you the nod and then the wink, and repeats until you get it.

I have stopped here on the rue des écoles
just off the boulevard St-Germain
to look over the shoulder of a man
in a flannel shirt and a straw hat
who has set up an easel and a canvas chair
on the sidewalk in order to paint from a droll angle
a side-view of the Church of Saint Thomas Aquinas.

But where are you, reader,
who have not paused in your walk
to look over my shoulder
to see what I am jotting in this notebook?

Alone in this city,
I sometimes wonder what you look like,
if you are wearing a flannel shirt
or a wraparound blue skirt held together by a pin.

But every time I turn around
you have fled through a crease in the air
to a quiet room where the shutters are closed
against the heat of the afternoon,
where there is only the sound of your breathing
and every so often, the turning of a page.

There is an efficiency of scene setting, tone and delivery of punchline that makes this a close cousin to prose, and there at times that one might mistake Collins, poet, for Dave Barry, humorist. He writes about being in Paris, at the cafe, in such an engaging way that it is possible for the untraveled among his readers to think what he does, or at least what he writes about, is the most natural thing in the world. One would nevermind that Collins scarcely writes about jobs he has had, rarely quotes those he has spoken with, or suspends or restrains the sense of his poised (but proclaiming) persona and concentrates on treating a set of ideas without his usual filter. He's mastered his tools and he cannot seem to go beyond the effects he's learned to create so flawlessly. Their dependability, though, is what makes them unmemorable once their page satisfactions have been had. I nod my head, I turn the page, I forget what I've just read.

It's like driving through an old neighborhood a few too many times; the ambivalence and nostalgic rushes no longer come after familiar buildings are viewed a hundred times too often. With the facile use of the names and pet phrases of Chinese poets, mentions of jazz greats, the sustained gazing upon still objects in and of themselves (doing nothing), the revitalization and one-dimensional ironizing of cliche, we arrive at a poet who has the mark of The Professional, "professional" in the same sense that a newspaper columnist is , a writer who is constantly preparing for the next piece, the race against a set deadline, the marshaling of all notes and ideas in the rush toward a finished set of statements. I remember I used to marvel at how elegant and spontaneously brilliant George Will seemed to be when his columns appeared two or three times a week, but after a while of reading him I recognized the formula he used to sustain his writerly flow. Collins, although not as prolific as Will is required to be, still produces an occasionally splendid poetry that does not challenge the mechanics required to write it at the same level of consistency; monotony is the result.
at October 19, 2008