GRAND KIDS OF THE WHITE NEGRO 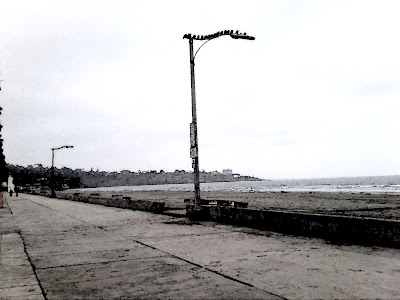 A car rolls by on the street with the windows down, music blaring, loud bass and nail-flattening drums from the speakers breaking up the tentative serenity one found at a street side café, a rapper stammering about hoes and bitches and gangstas and bling and gettin’ paid and bodies bags, a litany laced together with variants of four letter words that no longer shock or even offend but are ugly all the same, like large piles of crap left on an otherwise fine dining table setting. It’s kids telling us where it’s at and they are in our face, says an associate, and suddenly you feel like you’re in the Culture Wars once again.

Progress means moving forward. Four letter words blasting from car speakers on public streets isn't progress for anyone, it's a loss, both in civility and in respect others. The same goes for morons yammering about their hemorrhoids or some other aspect of their inane and consumerist existence to fellow dunderheads as they drive their cars or fill our stores, theaters and cafes as their r broadcast -quality mediocrity saturates square foot of  public space. It's another degeneration of the public sphere, unless you think that being able to establish yourself as a lout and a self-obsessed boor rapidly in the presence of strangers  constitutes an improvement. I am willing to concede, however, that for some of us becoming a full time creep with pretensions of  Thug Life constitutes an improvement, which only underscores how pathetic a large portion of  our youth have become, shrill and vain.

Also, any kid, black ,white , Hispanic or Asian ambling down school halls emulating 50 Cent is regression of an odious sort, a realization of Norman Mailer's romantic ideal of "The White Negro". It's doubtful even Mailer would find this trend enviable, a generation of young people placing a value on the ill formed locutions of millionaire goons and wallowing in a subculture that prizes accumulation of material and money at any costs, including the sacrificing of one's humanity and the community one lives in.

Being from Detroit in the 8 Mile Road area, I know full well what "Wiggers" are, and I'm old enough to realize that the phenomenon is not a new wrinkle in the scheme of things. Times and styles change, but a constant in my life and in my parents life was white kids affecting the style and musical habits of the current edge of black culture. My reference was to Norman Mailer's famous essay "The White Negro", written in 1957, where he argues that whites who want to free themselves of crushing and killing conformity must emulate the style and language of blacks because blacks, he opined, are closer to violence and thus privy to kinds of rapidly deployed existential knowledge that a bookish and emotionally neutered dominant culture could never know.

Mailer had a continuing theory  that living close to violence, the kind of violence that is
an intractable of your race's metaphysical being, was an entry to spectacular influxes of new perception and awareness that dismantles the many veils of false consciousness. It's all beautifully if bogglingly argued in the essay, and there is a good discussion here of Mailer's work, ideas and this particular essay here [www.english.upenn.edu]; the short of it is that Mailer thought whites blessed to be attracted to black style and culture and sought to emulate it with" spontaneous bop prosody" (Jack Kerouac's phrase) were the hope of the white race. Mailer was speculating that the kind of knowledge of violence that blacks had would do well to help the questing Hipster gain new perception and new experience and allow him to create a truthful world where real choices are possible and individual responsibility for them is a matter of what private, divinely derived ethics one has made with the God of their understanding.

Among the problems with all this righteous forecasting and waxing poetic is that the Revolution as described never starts, and Heaven does not arrive on the planet, conditions that are easily explained away by revisions to theory where it practice is at fault, not the catechism. Petty and major criminal acts continue to be romanticized as a people’s spiritual rebellion against crushing falseness and capitalist hegemony, and the emulation of those manners in the popular culture becomes an unconnected cluster of trends and marketing clichés. Above all this is Marcuse’s fleeting notion of “repressive tolerance”, often mocked and maligned but prophetic, timeless and tersely wise when one witness their idealistic style turn into advertising slogans and their manifestos become the humorless rationale for being a monster, a thug. Everything is allowed, everyone has their say, each word of dissent and radical exception is allowed , nothing is forbidden, and everything is the same. Nothing happens .

Simply put, the Man, as he was affectionately called in the Sixties, makes your protest and revolutionary style ineffectual by allowing you the means to express yourself and your peculiar take on the erring course the culture has taken. Your protests become part of the news cycle, more factoids to fill the spaces between advertisements. Nearly fifty years later one wonders if Mailer would approve of the bragging self regard that black style has turned into, and if he would admit that "wiggers" , albeit emulators of black style, are merely followers of fashion and consumers after all is said and done with.