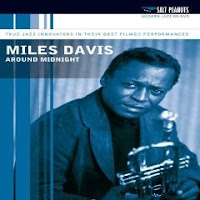 Filmed near the end of 1967 for the most part in Stockholm, Sweden, we have here a choice document that dispenses with the Davis mystique and allows us to hear the music , free and clear. Miles Davis didn't say much, as a rule, to his audiences, but with a band this good playing jazz this brilliant, it was wise for the band leader to allow the improvisation get the message across. Davis' trumpet work is all that is legend, crisp, curt, cool, muted, full of spatially lyric melodic forms and bursts of striking tones and angular phrasing. You anticipate the trumpeter's every solo, wondering what he'll think of next. Wayne Shorter on saxophone is Davis' perfect foil, an original voice who could provide you a sense of fully conceived and executed composition with each of his solos. The rhythm section of Ron Carter on bass and Tony Williams on drums is wonderful as well, especially Williams, who provided a malleable pulse that linked the instrumentalist’s dialogue.

We who grew up with Jimi and were saddened by his early death need to face facts and admit that he was an underdeveloped as a guitarist. In concert, anyway. While there is an oh-wow factor to consider in the man’s playing , the context is historical only, and an out of tune guitarist who sounds bored with the songs , the riffs and the stage antics he’s paid to perform does not travel well into the 21st century. For all the genius he demonstrated in the studio, he was a messy, out of tune, mistake-prone improvisor live, and this DVD shows him at his most exhausted. This is not experimentations in dissonance, as some would suggest, it's just inferior guitar work. Sorry, Jimi, but I do wish you had lived and gotten your act together, but at least you left us with "Electric Ladyland". I wish we had another ten years worth of music that amazing.
at August 01, 2008