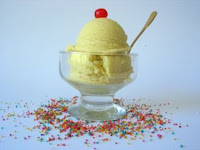 The whole issue as to what makes for a "moving poem" is as subjective as what the best ice cream flavor is, and the delineation of these differences are what makes discussing poems , at times, a great pleasure. I might have qualified this further by saying that I was moved by the poem and had assumed that Pinsky was as well, but no matter. "planting daffodils" is a lyric poem, analogous to music, and there is something in the sound of the words and the spaces between the images they've formed that gives me a clue to several ideas that are tangible yet beneath the surface of what the poem describes; the art of what was almost said. What comes into play is the reader's task, if they're interested in the task, to complete the poem itself; thre is a meaning the poet intends, yes, but there is meaning the reader has of their own that can possibly make for a meaning even more fascinating than what the original author had thought possible. One is moved by the sounds of the words placed together who's musical properties, their very sounds, act as a trigger for some of us who would then quite suddenly experience something of a revelation as a sequence of memories, fragments of recollection, piece themselves together and give the poem that's beheld on the page even more resonance than if one were merely trying to deciper the author's private intentions. Boulay has the ear to make these things happen. One is moved by public expression and the private reactions the words , together, stir.
Charlotte Boulay's poem, spoken of in the last post and in a discussion here is a useful illustration of how our concepts of life and death are layered in a sheer set of metaphors and analogies that contrast our routine lives with our idealizations, and warns, at the margins, that we will be surprised, shocked and saddened at the end if we think we've gained control of our fate beyond our final day.
The strange thing about personal tastes, whether it applies to ice cream or poetic styles, is that while a collective of interested folks might agree in the abstract what constitutes quality, the more specific , localized elements become dicier the closer we inspect.
There are folks I know who cannot stand chocolate, strange as that might seem. Nonetheless, they are adamant in their aversion, and can sound off with varying degrees of articulation as to why chocolate is vile, or at least undesirable. What interests me isn’t whether I’m converted to their thinking, but rather that they make a good argument for their belief; while I might not be convinced, I might learn something in the exchange about conflicting tastes, and enhance my own appreciation as a result. Ideally speaking, of course.
The first thing to accept is that some folks will not have their minds changed about their tastes and their prejudices; it becomes, then, a search for those with whom you might disagree but might learn something from.
at March 21, 2008