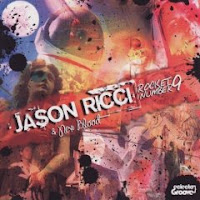 Anyone with a strong need of hearing some of very fine and blistering blues harmonica work by a player dedicated to extending that small instrument's capacity to surprise a listener, I'd recommend getting the new disc by Jason Ricci and New Blood, Rocket Number 9. Ricci is one of those musicians where you can here the influences of players he's "gone to school" on (sounding to me like a sweet blend of Paul Butterfield, Little Walter, Sugar Blue, Sonny Boy Williamson and Howard Levy , and a smattering of mainstream saxists ala Paul Desmond )who has blended what he's learned into a vigorous, original style. Rocket Number Nine is a glorious and tight blues rock album, with plenty of sharp guitar work, a rhythm section that balances tightness and an an appealing , shambling kind of looseness , all of this highlighting Ricci's serpentine harp improvisations and ragged-but-right vocals.

What becomes obvious is that young Ricci is not stuck for an idea, and it's a wonder to hear his solos rage and soar and then transform into jazzier lines; one would have a hard time to finding another harmonica player with a better grasp of his technique and imagination or who makes as much of an effort to present fresh notions, configurations and twists into his playing.

There's a naturalness to what he brings forth, a sensual joining of his lines that is remindful of Butterfield at his most prime; rather than seeming like an upstart perfunctorily playing his warm-up licks before launching his super chops too soon and too often, Ricci, like Butterfield, has a jazz-players of dynamics. There the rare skill of building and releasing tension that keeps on the edge, motivated by the band's virtuoso rhythms and the lead man's sober unpredictability. New Blood, as I said, is a tight, rocking, funkified band. Everyone, take a bow!
at March 23, 2008