Some prose on not writing

So many would be poets, critics and furiously scribbling visionaries and spell-check philosophers are, at this minute, this very second that you take to read this sentence, gnashing their teeth, cracking their knuckles, running their fingertips over the surface of their keyboard as if to start a cadenza of rhytmic assault that would split the room in angry, splintering halves, all this as the cyclopean computer stares unblinkingly at them, revealing a characterless word document in the center of it's digial iri 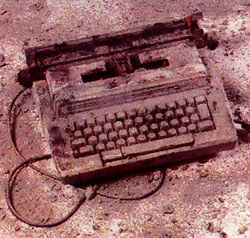 s, and nothing comes to these poets desperate to make art, to sock it to their internet pals and enemies that theirs is still the words that come with the ceaseless flow of a muse that's fallen in love with a mind that cannot be contained, damnitallagain!, the words do not come this time like a lover who told the truth when he or she said they were leaving for good, the words don't come, the stream is dry, there is only the room and a man dying on the vine, jacked up on coffee with nothing to say except goddamitallagain!


Picture, if you will, a poet sitting at their desk, drumming their fingertips (if they're inclined to drum) on the mouse pad, taking long and (always) furtive drags from a cigarette (if they smoke), staring through the window into a distance where we they hope to see the returning silhouette of inspiration getting off at the bus stop, suitcase, back from travels hither and yon, trudging up the street, smiling, waving, delirious to be back on the block with a fresh cache of first lines and snappy endings and clever slant rhymes to fuel another half-collection of poems. Only there is no bus stop pulling away, no lone inspiration repatriated with the homeland, no life at all in the distance no matter how hard, how furtively the poet stares to where the horizon meets the last grove of trees and house. The poets stopped drumming their finger, crushes a cigarette (if they were smoking) and sits upright in their chair, they begin to type, they type anything at all, they must fill up the monitor with sentences with broken right margins that don't lend themselves to immediate sense, the piece under construction seems to be one set up after another, a series of private rituals that are as quaint as the writer's concerns with ordering the world in a sing-song rhyme scheme, the fingers rattle on, they pause, the monitor fills with words, something seems at last to be gelling, but no, it got away, the idea, the pay off for the relentless set ups, the description of each minute ritual, all the stalling statics that come to mind only when there is writing to be done, are met only with frustrated expectation because the world the poet tries to traverse and transgress is too damn slow. The writer has their ideas of each thing he or she knows in community where they ply their craft, and he or she has done a psychic mapping of where the objects-- each animal, tree, billboard, car, television antenna--will reside and how they will resound, but the world of it's own accord isn't as fast as the writer's wit, nor has the shabbiest idea of irony or other literary effect.

More panic, maybe another hypothetical cigarette is lit, smoke inhaled, a thought, another thought, the same thought: am I writing the script for the planet, or am I trying to remember what's already happened?I've nothing to write about, the poet sighs, but keeps on, the boulder is being shoved up the mountain, here we go again the poet complains, and what had been a late after noon growing serenely dark in a wrap of inactivity , small breaths , becomes instead an agitated wrap of stalled desire, a membrane one cannot get to the other side of fast enough. The sky darkens further, there is only a slight rime of orange-gold light remaining of the sun as it falls behind the line of trees and slides the other side of the earth where there may well be someone in a room at a desk hovering over a keyboard inscribed in the characters of another language, watching the sun rise as odd birds start to sing before the first light breaks on their street, staring at the corner where they hope public transportation might bring back an inspiration which has eluded them on too many wordless mornings.
at November 01, 2009