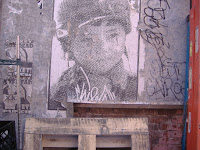 This isn't about poetry, but it's what I've been reading and it's what's kept me in my chair 'til too late at night, that being the semi-fictions of Nicholson Baker.Not a pleasant experience, if reading, as Barthes claims, is an activity we do , at heart, for the pleasure of the text. This was more like a calculus assignment, an exercise to see if I've been being attention the most current shiftings in what is considered fiction.I think I was ahead while I was still napping.

The general reeling I get from the Baker work I've read, U and I, Mezzanine, Vox : aimless wandering around a subject, speculation for its own sake, a kind of dithering response to extrinsically urgent circumstances,something very much like going up and down an elevator. This is the writing of distraction, and its a body of work that is compellingly shallow in its aim, a window display.

Very post-modern, I'd say, but it's disturbing to think that men and women who are nominally good writers can fill up pages and bandwidth with a tweaked yammering that exists only to avoid the ideas they begin with in the subject line. This is very much like Becketts' novels, Malloy, Malone, The Lost Ones, More Pricks than Kicks, and here we have the link with the Late Modernism that had the creator (author) and subject (novel) rising , in their imperishable need to produce, from the noisy clash and clutter of an aesthetic philosophy that demanded new ways of putting the world together, of making the world non-liner and multivalent, sufficiently prepared to be remade with technology and criteria. The Beckett/Baker writer seems to face the endless variations they may take for a narrative, and instead defer the decision about which one to take and what sort of fictional ethos to manufacture. The deferral is the subject itself, the eye-averting technique that wills itself to be endlessly about the undecidability of how the reality should be written into being. This is a sub-stratum in the though of postmodern writers, the avoidance of death through the refusal of becoming engagement of any process of decision making that would definition to a sphere of activity that must then be engaged, acted within.
at December 03, 2007