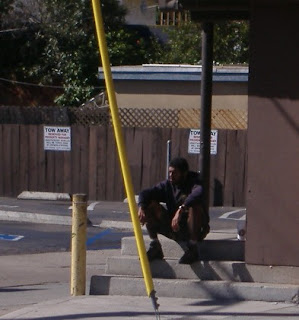 This poem I wrote about Emily Dickinson was less about her poetry--than it was about what I imagine to be the spectral dimensions of her cloistered life. Writing poems, speaking only with her own readings, informed by her books, her only audience her surroundings, her tiny little world. She is one whom speaking her mind in compact cadences, in densely packed epigrams seemed to be enough . Published but a little in her lifetime, I could only imagine further her bundling her missives, musing that she might become a voice, or a myriad of voices whose murmurings might seep through the foundations and plant a line or two in some passerby's ear.

We are all Emily Dickinson


We are all Emily Dickinson
talking to the furniture
over the pages of a book,
each leaf a reach across

we speak with modest tongues
when there is weather rattling
the windows, panes quaking
as though nervous with old meals
served on dark trays,

we have stopped moving
and have been nowhere at all
and we pause in our stopping
to consider the ash that rises
from the chimney logs,
the rooms and hallway
viewed through a crystal
that makes the air itself
become pithy, overgrown with reticence,

we become Emily
as we tie our missives together
with haggard twine in lacing loops,
we place our murmurings into a drawer,

we will laugh
like small girls
for years to come
as visitors come and go
through the rooms
swearing to one another
that they heard voices
behind the wall,
the eyes of the paintings
seemed to follow them around the room.

Emily Dickinson, the mistress of compressed reflection, advances her belief in the probable darkness that follows death when she write on the subject of the immortality of poetry. As with much of her work through her harbored life, there was a preoccupation with the concept that sheer nothingness awaited each of us. There was no "passing over", there was no seat next to God despite sermons and summons to behave righteously, there was no ethereal vantage point to see what writings were still read, which had been scrapped, which we rediscovered. Death was not a "state" one lapsed into as if it might be something one might come out of again; it was entirely non-being, bereft of potential. The fate of a poet's work, in popular regard and currency, were to be unknown once the lights went out. She doubtless refers to her own work with these lines:

She seems to assert that the poem survives , if it is vital, and with that the meaning of the poem changes with each generation that it passes through. Author intentionality is relevant only when the poet is still alive and is around to make further arguments, write more poems to expand or contract their original thesis. Afterward, what the author intended to say, what they originally meant, becomes merely historical, and the poem assumes a life independent of it's author's particulars. The poem, because it is vital, is adapted and absorbed by each succeeding "lens" "circumference" it passes through; vital poems and vital literature in general are a means for which the intellectual and cultural givens of age can confirm or critique the legitimacy of their habits of mind.
The text of the poem, or the author's thinking and intentions, cease being the end-all and be-all of interpretation, since the work's passage through generations of readers and discourse presents a contemporary audience with something layered and laden with meanings and associations that are not easily dispensed with.

The dialogues of a vital work have become as much a part of the poem as the actual words on the poet's tablet, freshly writ. This makes Dickinson quite contemporary in her thinking, since it reveals an awareness that there is no metaphysical certainty that will lock her work's definitive and final meaning into place, for all time. Rather, she was aware that, seemingly, that so long as a poem continues to be read, it continues to be changed, revised, altered. She would have been an interesting person to discuss reader-reception theory with. I don't mean to say that what trying to grok what Dickinson is driving is impossible or useless; I think I overstated that part of my rant. Rather, I think it's impossible to read the poem in situ, by itself, sans outside references, which is how New Critics would have us take up the text. Generations of discussion and interpretation have become inextricable from a vital poem and, though one may well re-establish a poets original set of concerns and the gestalt from which their poetics originated, that is not a place modern readers can profitably dwell for long. Our readings must engage decades of previous readings that have become inseparable from the vital work.

The goal is comprehension, in terms of making a poem mean something to readers beyond the poet's imagining, and that means creating new contexts and criteria for relevance. That is something I positive Dickinson, always one aware of the nearness of death, had on her mind. Or something akin to it. I don't think Dickinson anticipated immortality, but it seems likely that she wondered how her poems would be interpreted beyond her life. She seems to have been of the mind that the poems ,'though fixed, as such, in the same scale of words, wouldn't be quite the same poems she'd written. Absent her voice to correct an erring view, she was aware that the poems would come to mean different things to commencing generations

don't see ED as romantic either, but rather as someone who was doing the best they could do with a personality and temperament she couldn't help but have. Her reclusive life was her choice, and in that decision she was fulfilled, with her books and her writings. It's unfair to characterize it as "wasted" if she didn't strive for anything beyond her home in Amherst. It may well be that she was incapable of adding to the social good beyond her writing; not being a social creature, reticent to meet others and loath to travel , she wasn't inclined to engage others with ideas, projects or causes. There was nothing there to waste. Some folks are just like that, I'm afraid, shut ins with their hobbies and obsessions, doing the best they can do with the solitude they crave. The judgement of history is that Emily Dickinson has done substantially better than most who don't often venture into the light, whether sunshine or moonglow. Since her poetry is the direct and desired result of the reclusive life she chose, it really is impossible to contemplate how her extraordinarily odd and often brilliant verse without considering, speculating and opining what that life was like. She is Emily Dickinson, who left the world a bounty of work that's been mainstreamed more than any other American poet and, as such, she has no right to privacy. I am of the school that says that a poet on her level of recognition needs to have eveything about their life and work scrutinized so we can a better idea of what that greatness is. This includes her sex life, or lack of it: it has a bearing on the tone and style of her work.
at December 02, 2007