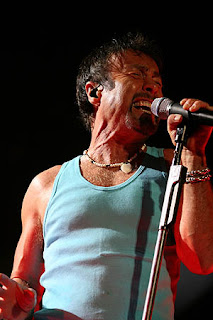 It’s my view, after a weekend of rummaging through old albums , that Paul Rodgers is the best singer of his generation, and is the only singer from that era who has gotten better as a vocalist .Roger Daltry and Robert Plant and a host of other blues shouters have had their voices go south, wither, get reduced to a miserable croak, but Rodgers has only gotten better--power, control, feeling, range, the whole shot. Though it's not for everyone, his Muddy Waters Blues album, a tribute to the great blues man, is a super fine blues/rock effort, with Rodgers belting, blasting and swing blues standards in ways veeerrrrrrrrrrrrrrrrry few Brits were ever to do . The songs, classics all, are bullet proof, made for a talent like Rodger's to grace. Rodgers is a brilliant vocalist who is also one of the worst songwriters of his generation, post-Free. Bad Company were an OK band, but not geniuses in any department, and the kind of blues-bathos that Rodgers and cohorts tossed at us made the band seem like a Foghat with a good singer. They had a run, they were popular, I saw them several times, but anyone who listens to the old Free albums, especially Tons of Sobs or Heartbreaker, and not notice the depreciation in song quality, or conviction of performance really hasn't been paying attention. Rodgers sometimes sounded like he were droning into a nod, that his last held note often sounded like they were going to transform into snores, and we might have had the sound of our singer falling to the floor , napping hard. Crash!!! Bad Company's best album was Straight Shooter. After that, it was cruise control rock and roll, hard rock MOR. Nothing especially rich or interesting, basic as bread and water. The Page/Rodgers match up didn't do much for me, not completely, but I did like their version of "You've Lost That Loving Feeling". But the fact is that the Righteous Brothers version is untouchable, though others have given the songs decent readings: Bill Medley, the lead vocalist on the original version, performance that is legend. The right voice for the right song. I think Rodgers would have better luck teaming up with VanHalen, at least for one album. But only if he let Eddie write the music and David Lee Roth scribe the lyrics, provided Roth can holster his ego and content himself with being Bernie Taupin to Rodgers’ Elton John. Not likely, though, and that’s too bad.
at November 02, 2007