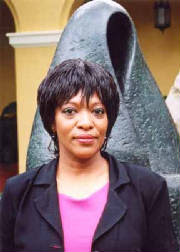 Context is indispensable in literary interpretation, but not every poem written requires the digging in order to grasp the larger things a poet is getting at. Rita Dove's poem "Blues in Half Tones, 3/4 Time"is a good example of this. The context is from the black experience, but she doesn't depend on every reader's knowledge of black history and it's struggle for civil rights in order for them to comprehend and respond to her more generalized theme: nay-saying and apathy are killers of the soul and ambition. Her particulars happen to be black, elements with which she creates art, but the poem is written skillfully enough for readers of different cultural origins to relate to her themes and understated assertions. Meaning, as such , is not locked up in an identity-specific criteria.

Dove sounds like she's talking about equivocation here, in the voice of someone responding to another's remarks or complaints about the wrongs that exist in life, both on the personal and global levels. The responding voice admits the unfairness of the wrongs that have been done, but offers a solution that equals the that one may as well make the best with the imperfect situation they're in.

From nothing comes nothing,
don't you know that by now?
Not a thing for you, sweet thing,
not a wing nor a prayer,
though you got half
by birthright,
itching under the skin.
Much of the troubles seem to be automatic, by the color of skin and the blood that courses through the veins; a hard fate one is born into and which one must accept as inevitable and unchangeable; only then can real decisions be made and real actions be taken to find or create some happiness.

The speaker seems a chronic, make-no-waves
placater, someone who would be considered a realist by some because of a refusal to be absorbed by the illusion and ideology of false hope (and who will not foster in others), and a defeatist by others who accepts what few comforts he or she has under the economic and political heel of a white majority. It's a voice, a constant voice in neighborly patois that encourages conformity, a studied complacency, a kind of defeatist small talk that has the unexamined sway of religious belief. There is no hope, no empowering on this earth:

I'm not for sale because I'm free.
(So they say. They say
the play's the thing, too,
but we know that don't play.)
Everyone's a ticket
or a stub, so it might as well
cost you, my dear.

It's the thinking that has it that no one gets out of this life alive, and that no one is exempt from the
dictated stations and pains of the class one is born into. There is no heaven on earth, and salvation and reward awaits in someplace other than this existence. This is the classic "slave morality" Nietzsche railed against in his tracts and rants against formalized Christianity . Dove, of course, brings this to street level, to a conversation had in market, over a backyard fence, over cigarettes and beers on the porch.It's an insidious device that keeps the powerless without means not by great machinations of determinedly evil powers (though there was and is great evil in the world)but because the victims themselves have adapted to their circumstances and made their powerlessness a virtue, a moral imperative.

Dove's poem is skillfully rendered sketch of a kind of flawed thinking that is as deep in its mal-forming tendencies as any real disease. But it's not just on the epic scale that the chatter concerns itself with. Even the smallest matters, such as finding what I take to be a wallet or purse at the end, are seen as evidence of hubris, and an invitation to the wrath of moronic, piggish gods:

But are you sure you lost it?
Did you check the back seat?
What a bitch. Gee, that sucks.
Well, you know what they say.
What's gone's gone.
No use crying.
(There's a moral somewhere.)A self-preserving relativism transformed into a laziness that is so uncommitted to chancing anything original or self assertive that the speaker cannot (or will not) even dare to attach a cliche moral to an already hackneyed reaction to another's incidental misfortune. You understand clearly why it is a young person, writer or otherwise, would want to leave the neighborhood and all it's nay-saying constraints at the earliest opportunity.

There was that law of life, so cruel and so just, that one must grow or else pay more for remaining the same. --Norman Mailer

Rita Dove doubtlessly concurs with Mailer on this point, whatever their differences on other matters might be. A fine, delicately attack on the conformist mentality
at November 01, 2007