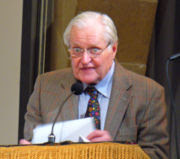 Eighty year old John Ashbery, our most awarded and praised and poet, has been named poet laureate for something called mtvuU, MTV's new 24 hour network geared toward college students. One understands the executives of MTV wanting to re-brand itself and regain it's edge in selling products to a mercurial youth market; what they are all about is making money and satisfying stockholders, and incidentally marketing some good music. It's understandable as well that they'd use the poetry angle as a means to rope in those liberal arts majors who are young and suffering and have a need to express their inner workings in various styles of experimental verse.

And yet , even here, the choice of Ashbery is an odd one, as he is one of the most difficult of America's few famous, not-quite-celebrity poets. Not a rebel, not a polemicist, hardly a rabble -rouser who makes speeches and writes incendiary essays against injustice, Ashbery is an aesthete, a contemplator, an intelligence of infinite patience exploring the spaces between what concioiusness sees, the language it develops to register and comprehend experience, and the restlessness of memory stirred and released into streaming associations. Ashbery's are hard to "get" in the sense that one understands a note to get milk at the store or a cop's command to keep one's hand above their head, in plain site. Ashbery's poems have everything the eye can put a shape to in plain site, clouded, however, by thoughts, the cloud bank of memory. He wrestles with the still-engaging problems of Aristotle's metaphysics, that the things in the world are only the expression of an Idea of that thing, which exists prior to manisfestation. It's a slippery metaphysics, an guarantor of headaches, but Ashbery wears the problem loosely; he pokes, prods, wonders, defers judgement, and is enthralled by the process of his wondering. Reaching a conclusion for him seems to mean that he is done writing, and no poet wants to think that they've used up their vocabulary.


One might think that the mtvU audience might be more attracted to arch romantic and dedicidely urban poet Frank O'Hara, whose emphatic musings and extrapollations had equal parts rage and uncontestable joy which gave a smile or a snarl to his frequent spells of didatic erudition. He was in love with popular culture, with advertising, movies, the movies, he had an appreciation of modern art, he loved jazz and ballads, he loved being a City Poet.He was more the walker than Ashbery, I suppose, or at least he wrote more about the going to and coming from of his strolls. unlike Ashbery, O'Hara loved being an obvious tourist in his own environment, and didn't want for a minute for his poetry to leave the streets, cafes and galleries where he treaded. Ashbery is more the stroller who gets lost in his associations triggered by what he beheld. Ever more the aesthete than his fellow New York Poets, he was interested in things a little more metaphysical, that being that the reality that exists in the inter-relations being the act of perception and the thoughts that are linked to it, which branch off from the perception and link again with another set of ideas, themselves connected to material things observed and remembered. O'Hara was immediate, like the city he loved, while Ashbery allowed his senses the authority to enlarge his perception, to explore the simultaneity of sight and introspection.

In a strange way, Ashbery is the more sensual of the two, willing to examine that even the sacrifice of immediate coherence.I'm not a fan of difficulty for the sake of being difficult, but I do think it unreasonable to expect poets to be always unambiguous or easily grasped. Not every dense piece of writing is worthy by default, of course, and the burden falls on the individual talent. Ashbery's writing, for me, has sufficient allure, resonance and tangible bits of the recognizable world he sees to make the effort to maneuver through his diffuse stanzas worth the work.

Poetry is the written form where ambiguity of meaning and multiplicity of possible readings thrives more than others, and it's tradition is not a parsimonious use of language, but rather a deliberate expansion of what words pieced can do, what meanings they can evoke, and what sensations they can create. Prose is the form that is, by default, is required to have the discourse it carries be clear and has precise as possible. Poetry and poets are interesting because they are not addressing their experiences or their ideas as linear matters subject to the usual linguistic cause and effect; poetry is interesting because it's a form that gives the inclined writer to interrogate their perceptions in unexpected ways. The poetic styles and approaches and aesthetics one may use vary widely in relative degrees of clarity, difficulty, and tone, but the unifying element is that poetry isn't prose, and serves a purpose other than the mere message delivering that is, at heart, the basic function of competent prose composition.

In any event, no one can begrudge Ashbery his fame, or his accepting an appointment as MTV's poet of the moment. Who can dislike a man who earns a living doing what he likes to do, and who of us wouldn't want that for ourselves and everyone else in the world?
at August 29, 2007