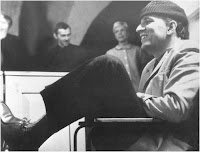 Two prominent film makers pass away in the same week, and I care not a wit for either. The work of either Bergman and Antonioni are what I'd imagine would be the in flight movie on jetliner to Hell.That scenario would be proof enough of a cruel and punishing God,since I know I'd wonder what set of deeds I'd committed that were so heinous as to warrant this severe a treatment. Humorless, witless, static, depressed, didactic and incorrigibly arty rather than artful, the films of both these sticks in the mud were popular at a time when a generation of art majors and movie critics eager to up their intellectual credibility all managed to convince themselves that movies were the last great medium for self expression. It became Art with a capital "a", "Culture" with a capital "cul".

And most certainly, the medium ceased to be movies, a medium where image , angle, editing and rhythm worked with craftsman synchronization to move a narrative forward and instead became film or, more pretentiously, Cinema. The implications were obvious; movies no longer about movement, but rather about time and the micro-cosmically morphing moods and perceptions within the elongated takes of self-annihilating characters trapped in dank terrains. The movies dragged, in other words; cameras stopped dancing with the actors through the sets, but rather became stationary recorders of some one's view of a empty alleyway.

After a time the long takes, the dead pan visages, the exotic marginalia at the edge of whatever plot line there is became mannered and conventional; it seemed more to do with reputations having to be lived up to than a fresh take on a storyline being crafted. Typical of contemporary criticism's attempt to explain problematic artists and the tedium of their work is the adage that such projects force audiences, viewers, readers, et al, to confront the elements an artist is working with and to re-examine their own assumptions. The presumption here is that the audience's attitudes prior to witnessing a Richard Serra monolith, Christo's grotesque wrap-jobs of public buildings, or in the matter of film, the films of Bergman and Antonioni, were wrong, pre-existing, inauthentic. Maybe even dangerous to one's health. The artist in this regard becomes something akin to The Perception Police, enforcing codes of seeing, ways of reading, psychologies of listening, and it's not all that far from mirroring a totalitarian spirit, at least in miniature. Once the audience member was on the artist's turf--the movie theatre, the gallery, the concert hall, what have you--he or she had given permission and implicitly demanded they be bullied, harassed, made uncomfortable, lectured to rather than spoken with, berated for a failure of wit rather than invited to investigate new ways of thinking.

"Forcing" an audience to deal with issues or ideas they would rather avoid--the eternal emptiness of the soul one discovers once the surety of a loving God is undermined being the issue here--is one of the cardinal conceits critics have used to justify the problematized stylistics of the difficult directors they champion, and for me the phrasing is a tacit admission that there's some amount of failure by the director to convey a set of narrative concepts through image and sound. It's an elitist claim, I think, and is handy way to side step a considered defense of the style and jump right into the next nest of literary conventional thinking one can claim is the result of the director's visual approach.

"Existential" questions have been a bedrock part of character and plot development in literature for centuries--go no further than Hamlet or King Lear or Faust (either Marlowe or Goethe), and as such that whole issue of being and becoming, of achieving genuine authenticity , has fairly much been absorbed by film makers since the medium was first used to portray fictional narratives. Audiences are well used to having to confront existential situations and spaces in the films they attend, and consider the whole issue pretty much a given. It is not a daring or cutting edge theme for either Bergman or Antonioni to have used in their work. The real issue is about style, and whether one prefers puffed up artiness over a subtler , crafted artfulness when one picks a director with whom to confront their despair.
at August 07, 2007