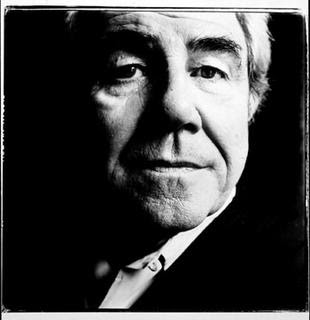 Jean Baudrillard , that grizzled scold of postmodern indirection, is dead as his ideas. Baudrillard’s formulations, however abstruse, seemed formulaic the more one parsed his pages. Umberto Eco, a clearer writer on the subject of surface appearances being passed off as authenticity, covered much the same beat in “Travels in Hyper Reality”, with a playfulness Baudrillard never displayed. Motherfucker wrote books of less use than a collection of Donald Rumsfeld speeches. At best, his expression of his ideas was a thick, lush weave of deferring equivocation and generous portions of gravity-defying association that thrilled you with the virtuoso language he could spin to keep on the edge of your expectation, sounding as if he were about to arrive at some set of something useful. One didn’t understand a phrase or a word, but one loved to hear him talk. At worse, he reminds me of Walter Benjamin, unable to shake his jargon lest someone find something in his writing they can interrogate in earnest. What he seemed to be saying, in louder or softer tones, and nearly always with the vaguest paint he could color his notions with, is that the authentic, the natural, the fixed reality we dream of returning to, is gone and never existed and how we conduct ourselves via strategies to oppose oppression and effect changes in our condition are doomed, finally, and illusory, since all is ceaseless duplication and variations of opposing versions of historical finality. It's all for naught, and we might as well do nothing at all, merely consume within the storylines and props given us and allow the puppets with the microphones, tv cameras and the Army and Navy to run their games. Remember, Baudrillard was brilliant at describing things and mounting details of what is contradictory, perverse or demonstrably false; notice, though, that he offered no idea on what anyone could do about the situation. My thoughts are that JB was a nihilist and that the bald face of postmodernism, in its global viralism, is to encourage inaction, apathy. There's much of the round robin in his rap, a circuity that works any argument against itself. But it reveals a fatuous tendency to not
answer a question. Agendas are not Baudrillard's strong suit, and after all the illusions that his evasions are a form of liberation and empowerment for those at the margins--the criminal, the student, gays, lesbians, transgendered, the perennially non white, we finally have a poetics that finds glory in things falling apart while the privileged reap their final profits. Their prescription for the population was what neocons wish for the voters; go back to sleep.
at March 12, 2007