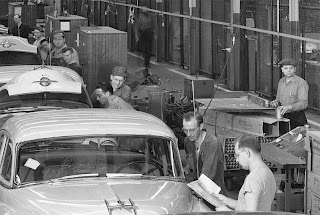 No one likes to work, and everyone likes to complain about having to do so. A general statement, for sure, but accurate in a general sense. Some folks we bond with and empathize with their experience, while with others given to grousing and grumbles we encourage to shut up, for God's sake. What's clear is that some folks are better at listing their complaints than are others. It's about style, attitude, on whether there's something interesting to hear, or read.Philip Levine is a sure cure for anyone who can't push the proverbial boulder up the hill anymore, and his poem "What Work Is" is a magnificent detailing of the glory and grime of getting your hands calloused for a paycheck. Levine, a Detroiter, is keenly aware of the layerings of the working Middle Class, and finds a way of speaking to their lives without swooning in faux socialist praise about "innate nobility". He respects the working class and his own experience too much to be anything but truthful about it. It's a fine poem. Stephen Burt's poem, though, has many problems. That he can write isn't one of them; this man can put together a sentence. But there are bigger fish to fry than skewed grammar.

The critical offense in Burt's poem "Dulles Road Access" is it's scarcely contained arrogance and repulsion of having to work, of having to sell something to someone who needs to be convinced to buy it. His theme was bad faith on all sides, and complains readily that our all our training in the arts and history are reduced to mere skill sets intended to move the Bottom Line. Everyone complains about work, everyone, no one wants to work, no one, everyone feels denatured and reduced in stature and squeezed for time as obligations time for hobbies and the arts, one feels less than human because of the need to fend, forge and feed ourselves and our own. Yet people work anyway, they show up on time, they do their jobs well, and somehow create lives for themselves that are worth sticking around for, and within the limits created by work, men and women create lives that are not entirely bereft of value , joy, aesthetic virtue. I've been working since I was fifteen, and though I might be deluded on the point, my life hasn't been the eternal grey wall Burt imagines the lot of us staring at while the office clocks ticks slowly to 5pm.

An old complaint, expressed at every water cooler, coffee house and bus stop across the country, and Burt's addition to this chorus, apart from adroit rhythms, merely repeats the muckraking findings of Vance Packard and Philip Wylie two generations previous. This is the poem who has dropped their rattle and can't retrieve from the crib they refuse to climb out of.

We are untrained
to manage even the pace
at which we live.

This is worthy of a groan and an obscene gesture, an insight the Hugh Prathers and RD Laings of the world offered up in the Seventies when the culture had a morbid interest in each inexplicable twitch in their individual moods. Burt can write about work as an institution and work as an experience in anyway and in any style he wants to,
but there's nothing "fresh" or generationally unique to his perspective except, perhaps, his willingness to complain more openly than other good writers have been. But this becomes bellyaching and complaining and the negative -thinking equivalent of all those feel-good bromides one comes across in pop psyche and New Age literature. In this case it's a conditioned response regarding the dehumanizing aspects of working for a living, and even the implied "we" of his generation's allegedly collective attitude toward being a professional, it amounts to the same species of precociousness that made much of the Sixties and Seventies counter-culture a morass of unfocused, clueless indulgence. It's an attitude one grows out of, provided that sense of specialness doesn't kill them, spiritually and literally. Really, the plain message of this poem is that the narrator hates his job and thinks in generalizations to convince himself that he'd rather be lazy than productive. Levine, as the title declares, actually talks about work, this bothersome, tiring, repetitive activity we with varying and tailored approaches, attitudes, responses. His poem gets across the finer and subtler dimensions of labor by actually sussing through the particulars of desire colliding with necessity; this is where he finds his poetry, and it is here where he can address the conflict in unexpected and believable ways. You trust that Levine knows something about having to show up on time for a job he hates (or loves). Burt convinces us only that he has hard to meet needs.Burt's poem is nostalgic, really, and he seemed to writing in the shadow of the truly colossal complainers and, as such, has written a poem that is sorrowful reminder of the worst creative writing classes can do. The worst they do is that teach young people to be professional poets who are more concerned with making life accommodate language and not the other way around.
at March 14, 2007