Hemingway and the heart of the matter 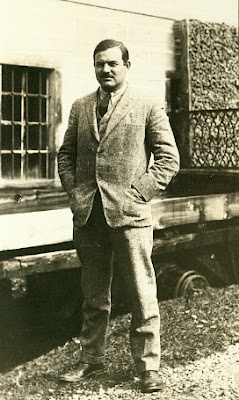 Now and then, in passing, not intended to start a war of any dimensions, someone remarks about how Ernest Hemingway is overrated, his books kept in print and his reputation buoyed by conspiracies of tired white academics that yearn, in secret, for another “good war” for America to again assert its virtue. I get irked, bothered, pissed off royal when someone baselessly derides Hemingway’s accomplishment as a storyteller and stylist (but none as a thinker), but I do see the point about the cult of Ernest who’ve come to regard him as a stalwart of honor and reserve forged by the sacrifices of having lived through a World War when the enemy and the Evil they presented to America wasn’t the least ambiguous or murky with runny metaphorical drift.
Now and again I recall essays and lectures about bad wars and bad faith and bad character for the citizenry as a result, and even sighing in exasperation as otherwise intelligent people suggested that America could use a good war, a “just” war in moments of low national mood so that we might collectively have something to rally around, some shared values to swear to protect, some duty to perform. This is a slippery slope to fascism, yes?

I say leave Hemingway out of the war drum circle and concentrate instead on how well his stories convey the experience of a generation of Americans suddenly thrust into and upon the world, pulled from Wisconsin farms, Bronx tenements or California movie lot, and marvel as well at the economy with which he did it. As the moral authority of governments gave way to chaos and slaughters that only burned the earth, ideas of what were of value were internalized, personalized, nearly becoming part of the nervous system. Hemingway is, in fact, grossly under-appreciated for his best work, specifically "In Our Time", "The Sun Also Rises", "To Have and Have Not". So much gets accomplished in such a stingy choice of words! His was a different world than the one we live in now, and his accounts of the world, is, at its highest, sublime. At his worst, he wrote sentimental gruel whose bathos so thick you could use it for mortar. A string of post-humous novels hasn't helped the reputation, and have served to obscure the real accomplishment. His writing is about trying to learn to be a man when even the teaching father is a madman sacrificing family for blind patriotism. It’s precisely because that he had issues with his masculinity that he tried to work out in his fiction, is a large part of what makes him great. The point of literary study is empathy as well as analytical comprehension. Hemingway may have fallen short of the self-actualization, but his fictive attempts, at best, resonate and move, and achieve transcendence even when he did not.

Perhaps it is a male thing, that these are matters that a reader might have to be intimate with in order to enlarge their appreciation of the work, but I think not. More, I think, it comes to personal taste, as in, if one does not care for the way Hemingway described his universe, fine. But I don't believe the ability to relate emotionally to a text need be restricted to gender, nor should it be limited to any other smoking gun criteria. The college professors who instructed me through his work were men and women, and the women, I have to say, win for inspired lectures, wedding appreciation with critique, understanding the poetry of the struggle, and why the struggle was futile.

Prospecting for insight through Kerouac’s' journals will be give scholars reason to devastate another section of prime forest, but his novels remain , inspite of it all, maddeningly inconsistent in their best forms, and progressively unreadable in later writing years. Kerouac had his moments of divine lyricism, I admit, but the cult around his grey, sotten visage is nearly as objectionable as the devotion many give to Ayn Rand: the matter is not how good the writing was, but what the author stood for. Once the chatter about writers drifts, or jumps desperately, from concerns with style in the service of great storytelling and lands in the odious camp that insists that a writers' primary task is only to reaffirm a readers' shaky self image of being a rugged and forward thinking individualist, I reach for a good book, or ponder taking a nap. Either option is more fruitful, or both are more interesting endeavors. It galls me that comparatively little attention was given to the passing of William Burroughs, the one true genius of the Beat group, while the easily assimilated rebellion of Ginsberg and Kerouac claims the top half of the literary pages.

Delillo’s work, it seems, will survive the withering dismissals of affected yokels, and "great American novels" continue to be produced yearly, quite despite our obsession to narrowing the field to only a handful of worthies who fulfill criteria no can state for sure. But DeLillo stands poised for world-greatness because he brings Americans into the larger world,where qualities of being American, imagined by our civics teachers as being divinely granted, has no bearings in a world that seems incoherent and supremely foreign. DeLillo's work, in "The Names", "Mao II", "Players", have Americans of a sort--professionals, artists, intellectuals, poets, usually white, privileged--losing themselves amid the shifting and renegotiated narratives, collective and personal, that are repeated, ala mantras, to give the world as sense of reason and purpose beyond the hurly-burly of the phenomenal world. This is a sphere where the sense of the world, our strategies and accounts to deal with it, are fed to media and then sold back to us with conditions attached. I imagine a work that is equal parts Henry James, for the aspect of Americans confronting the non-American world, and Orwell's "Animal Farm", where we have the pigs, in the dead of night, with ladder and paint brush, changing the wording on the social contract painted on the side of the barn.


As has been said, there is no "last analysis" to be had just yet, and for DeLillo's sake, I hope he writes a few more novels before we start issuing forth career-ending appraisals of his body of work. I am an obvious DeLillo partisan, but I don't think everything he's done is fully rendered, satisfying every idiosyncratic standard a "serious" reader might contrive, but the fact is that DeLillo is not a novel-a-year contestant with Updike or Joyce Carol Oates, or recently, Mailer, all of whom seem in a rush to consolidate reputations and make themselves nice and shiny for Nobel consideration. DeLillo has published a mere 11 novels since 1969, hardly an overload for almost thirty years as a professional writer. That he has themes that re-emerge from work to work is to be expected from a writer, and for DeLillo, his investigations into what we too- easily refer to as post-modernism (yes, I am guilty as charged) and it's accompanying paranoia have produced major fiction, which is about, in too-broad a summary of his work, the difficulty of living in a world that has been stripped of any resonance of meaning, any suggestion of Truth, capital "t". This is a kind man-made environment that stems from the make-it-new innovations of High Modernism, and entering the next century with a sense that we have not learned anything despite high-speed technologies that shoot raw and indigestible mounds of data from one place to another.

The best writers today do no different, living up to the nothing else other than the authenticity of their process. Faulkner and Joyce have comparable greatness, I feel, but I cannot escape the feeling that Joyce was the brainier of the two. Joyce’s' infinite layering of literature, history, theology and myth in to the molecular structures of Ulysses and Finnegan’s' Wake demonstrates someone with a sensibility that subtly wishes to have Art supplant the Church as the institution men may comprehend a Higher Truth( what ever it turns out to be). His own dialectic method, perhaps.

I agree with the remark of Faulkner being much blunter, though he is scarcely a brute: the sensationalism Faulkner could give into was also linked to a patch of swamp that released his language, and allowed him to master the interior monologue. This gave us novels like "Light In August" and "Absalom, Absalom" that had with diverse psychological density.