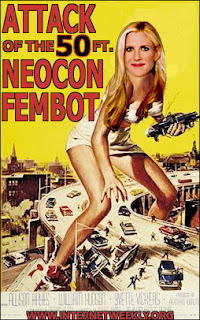 It's official now, Ann Coulter has given up the illusion, believed or otherwise, that she is an important political intelligence and has now acknowledged her status as a Republican party clown. Calling Democratic presidential candidate John Edwards
a "faggot" at a recent conservative convention, her routine becomes transparent, and she now becomes the equivilent of a third rate stand up comic who never got their shot on the Tonight Show, trading in the same boiler plate tastelessness for a
marginalized crowd of like minded dimwits.Witness this nitwit's floundering quip here, courtesy of Salon.

Perhaps is the neocon version of bad poets and gratingly neurotic bohemians sitting around cafes flattering each other with quaint left wing jargon, horrendous poesifications of so-called verse and various versions of how "The System" is keeping everyone in the toilet. Coulter seems the first instance of a generation of right wing shills who, having no second act, will join the assorted other "edgy" alternatives in the vast dustbin. But not before she can squeeze a few more dollars from her pose and convince herself a few minutes longer that she's still relevant.

I suppose she's trying to pass herself off as being edgy against "political correctness", but that's a standard complaint that has lost an urgency in the godawful long time since right ring attack radio took up the call. Coulter is for hire for anyone who will pay her to do her tricks and recycle her bile. It's someone's idea of fun, I suppose, though one can't shake the feeling that there's anxiety thick enough to spread with a shovel inside that equine face of hers. Two things are clear in view of her use of the F word against Edwards:

1.The shriller she gets, the more her Adam's Apple bobs.
2.One remembers Truman Capote describing a best selling woman author from the Sixties as resembling "a truck driver in drag."
at March 03, 2007