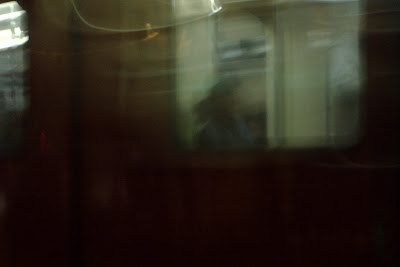 There are times in the middle of the afternoon after I've finished what I think is an inspired poem when I have the momentary sensation--fleet! is the world--that all those wonderful metaphors and inverted oppositions were given to me by God Himself. I've sober nearly twenty years, though, and I have a strong feeling that if I ever heard God speak, he'd tell me to go ahead and have a shot of hooch. Faith I have, but not to the degree that I think a higher power uses me as a mouthpiece for his left over tropes. The feeling passes, and I disabuse myself that poems and prayer are linked in degrees more bountiful than rare. I think the distinctions between the two things are clear and crucial, as both modes of address are for distinct purposes.

The key distinction between poems and prayers are that poems are almost invariably written from within experience, and as a form, is under no obligation to detail and highlight it's rhetoric toward any obligatory pitch or prejudice. The poet, distinct from the praying person, has the freedom to invoke God or invoke him not at all; the poet might even insist that the wonders he or she comes to write about are phenomena in and of itself, independent of anything divine.

Poetry allows for the religious, the agnostic, the atheist and the indifferent with regards to God. The single requirement is that the poem meet the needs of literature, however the poet lands on the issue of the divine; what constitutes literary value, of course, is subject to a discussion that is nearly as abstruse and premised on unprovable suppositions as theology, Literary criticism might be said to be it's own sort of religious dogma.

Prayers, in contrast, start outside human, terrestrial experience and beseech a higher power to intervene in human affairs. While poetry , in general, glories in all things human and is obsessed with the mystery of perception (finding that miraculous enough ), prayer assumes human experience is flawed, in error, and needs a strong hand to right itself to a greater purpose. Prayer in essence is an admission of powerlessness or one's situation and one's instincts to cope with the difficulties presented; the varieties of spiritual inspiration vary and are nuanced to particular personalities and finer or lesser nuanced readings of guiding sacred texts, but prayers share a default position that human existence sans God is incomplete and in need to surrender itself to the Will of a variously described God.

It is possible to write a poem that addresses god that is not an entreaty, finding His presence in the world as we already have it, not as we think it was.
"Question" by May Swenson does this.

With cloud for shift
how will I hide?


It's a fine poem, and Swenson is speaking from within experience, finding something wondrous in the world as it is. Her poem is about finding God in the details of this existence, and does not beseech a higher power for guidelines about how to live a more righteous life according to
scripture. Prayer assumes that human life, in essence, is merely an audition for a seat in Heaven. Swenson assumes we already have our seat and seeks God's inspiration in making the place where we live purposeful and fuller.
at March 04, 2007