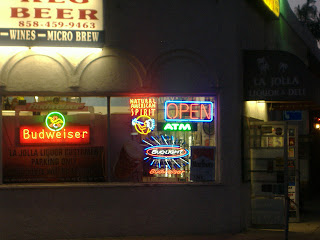 It's a scene any introspective sort will recognize or feel empathy for; one is alone in a cold, dark room, staring out of the window, gazing at the stares and the spectral clouds passing over the face of full yellow moon, contemplating what there is beyond this existence. Is there something one goes to and finds an ironic eternity tailored by one's decided deeds on earth, or is there only dust, silence, a blank slate of non-being? This isn't comedy for self-infatuation by default, but exactly the kind of exercise the mind plays at when there isn't the opportunity to engage with the world beyond one's own skin, and it's not uncommon to wonder, once one is done with the cerebral gymnastics to sort through their obsessions, loves and losses, to finally ask the variations on The Question: when does this all end? What will I say if there is someone /something waiting for me? What legacy will I leave? What will the consequences of what chose
to do and refused to do?

One wonders, one pauses to refresh themselves, one ponders, one writes a poem , one dreads, one begins a hundred different projects for fear of wasting what time remains on the Big Stop Watch.Thanatos brought to the personal level, where it hangs alongside the day's activities at work, lovemaking, paying bills, visiting museums and playing with grandchildren, is that chill one cannot shake from the bones. It is a tone in one's voice that one cannot rid themselves, it is a low grade depression that lingers no matter how hard we laugh. Death doesn't so much stalk us as it waits,in an inside coat pocket as an envelope we cannot open , containing the expiration date of our lives. The sum of many a man and woman's life has been how well or how badly they've adapted to the knowledge of the inevitable deletion of their life force; literature, in it's limitless styles, rationales, intentions, aesthetic rules and origins, chronicles to greater and less greater degrees how well one lives with the sour taste of their own death forever under the savoring of each bite of food and drink.

Death's Doorman by David Bosch, turns this theme into a two voice theater piece, and it works, surprisingly enough, for such a gimmick-tending conceit. I well imagine the introspective sort I described earlier in the bathroom, late at night (although a sunny mid afternoon would do just as well) staring
at the mirror , envisioning all sorts of after life scenarios, asking every question , poetic or merely dumb, that he or she can muster, trying to arm themselves with a knowledge where an unavoidable fate can be made
tolerable. It's as if the interlocutor is trying to reserve the best seat on the last plane out of Hicksville. What returns , we see, are one word answers, like echos coming from a long , deep cavern, warbling refractions of what he or she had just asked, the keywords distorted and changed.

Would this be ambience, or atmosphere?
Fear.

I hadn't expected such an emptiness!
An empty nest.

Do you open up before or after a good pandering?
During.

So let me be the first to congratulate—
Too late.

What is it people seek in your utterances?
Other answers.

You knew Mozart. Before he decomposed—
He composed.

And Freud was your plumber. Conscious or unconscious?
Kein Anschluss.

But have you ever crossed over? You know, necrophilia?
Ophelia.

This becomes a brief and bitter comedy, and is something Samuel Beckett would have written as one one of his radio plays, the usual scenario of a character frozen in habit or ritual , redundantly trying to revive some earlier sense of coherence from situations or things. Bosch's second voice offers no inside information, provides no clues, but rather deflects the inquiries with accidental puns. This is a piece that doesn't so much ends as it does stops , cold. It's seems that this inquiry could go on indefinitely, right to the grave, as the
peculiar narcissistic loop provides just enough variation in the malformed responses, the echos, that one can proceed with it forever as if they were indeed closer to a Big Secret. Bosch is wise to leave the scene when he does, leaving us with a funny , if minor dramaturgy . One can, of course, seize upon any of the questions and their responses and find layers of implication and hence unearth every deferred meaning, but I think that's part of what makes the poem work so well. Bosch plays on the human brain's insistence on making utterances contain more than surface references, and it is a nice trick he's pulled. The character, the interlocutor , is trapped in infinite regress with his questions, and the reader, as well, might be compelled to parse each pun and skewed return. This might ,then, be a comedy with two acts performed simultaneously.
at January 16, 2007