The Flaneur trips over his show laces 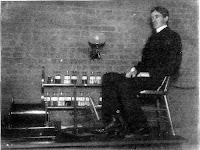 Yet another poem about poetry, a category Slate poetry editor Robert Pinsky shows a personal powerlessness to leave alone. And once again the self-reflective twitch proves to be an ideal way to fill a page, a monitor, a notebook with a series of eccentric line breaks. In this instance, Campbell McGrath's"Lincoln Road" offers a twist and merely uses the meta poetry index as a means to jump start a verse:

Browsing, before dinner, at Books & Books,
checking out the new poems
in the new journals, the vast glass panes thrust against
by shoppers and gawkers on Lincoln Road
emit a particular cautionary hum
as they insist upon delimiting inside from out,
tongued and grimed by the fingerless
gloves of the homeless,...

Irritation is the mood here, a man of ideas focused on the latest missives from the competition, seeking either pleasure or taking notes on what
the hot first lines are, when the bustle and commotion of the rude public interrupts him. Damn, I hear him think, now I have to slip into my flaneur costume and observe the cursed details of things in the city and the population who negotiate the hard corners of sales counters and intersections! Damn it all! The descriptions, following suit, are fussy, crabby,too full of small digs and dimunitions of character to seem at spontaneous. There isn't, of course, any further mentioning nor obvious dwelling on the entwined poetry or being a poet, but the tone and pace of the poem, the leaden use of "literary" words to describe banal
circumstances, bespeaks a boredom. This doesn't have the virtue of the boredom become genuine ennui, a variant of despair, a quality that at least might inspire sharper language that bypasses the rote literacy of McGrath's ode to his
prowess as an observer.

...the splash
of modest fountains
in common space, a baby
in green hip-harness
staring back at me goggle-eyed, recording it all
like the tourists with digital camcorders
pre-editing their memories
and the ringing of cellphones broadcasting
a panegyric of need
with whichever hooks and trembles
we have chosen in the darkness to answer.

The problem is tone, of course, and none of this convinces me that what was described was actually seen . Suspension of disbelief comes into play here, since this particular list attempts to get across what was observed in a hurry, while browsing, on the fly, it needs to suggest something fast, mercurial.

You'd think, really, that this sort of matter should catch the rhythm of things that are fleeting, and are fluid. The people, places and things should be made to seem that they have lives or conditions of existence apart from the frame Campbell places around them.The effect in the poem, though, is static, like butterflies ethered and pinned some eccentric's collection. There is a surface beauty to the poem, but all these people, those who've interrupted our narrator's browsing, are stick figures all. Campbell's descriptions are worked over, padded with overly precise detail that sounds mechanical, unnatural. Attitude as well ruins the mood, with the asides about tourists with their cell phones and cameras seeking an unnatural process of memory preservation belonging more in a reckless, full tilt rant rather than a poem that at best would claim to be a skillfully rendered sketch. We have a here a poem that at the least offensive sounds like lines that have been saved and taken out of a drawer.It satisfies as nothing at all, and the material is so dry that these lines could be used as kindling.
at January 11, 2007