"HEAT", a movie by Michael Mann 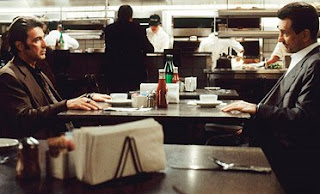 I’ve seen director Michael Mann's three hour masterpiece Heat four times, thanks to HBO and Netflix, and a recent reviewing the other night has convinced me I ever was of it’s greatness. Maybe it's just a guy thing where the typical male obsessions, like guns, cars, violence, are elevated to potentially embarrassing levels of reading, but the ironically named Mann has the cool style to pull off the task. "Cool" and "style" are the important words to remember.It's a heist film as tragedy, and its particularly arresting to seeing the un-bottled rage of Pacino's dogged cop contrasted with the coolly methodical criminal of DeNiro set against the expansive , cluttered , over lit loneliness that constitutes Mann's idea of Los Angeles. Mann'>Mann is in control of his materials, and his decision to limit the amount of shared screen time between his top billed stars was smart indeed; rather than a conventional vehicle plot geared to accommodate big stars in uninteresting situations, we get ins study in distinct and not-so distinct contrasts as the competing personalities and their agendas head to an ending where only one, or neither of them is standing. Mann at his best gets the hard-boiled genre where all a man has going for him is his professionalism and the personal code that comes with it, and Heat to me is an intriguing extension of the style.

Some critics were alarmed by what they felt was Mann’s reluctance to have feeling for human relationships –we are in the country of stoic individuals conducting themselves by codes of honor and conduct that places weight on action, not words and their adjectives--the movie is about human relationships reduced to the occupations that command everything; emotional attachments are a luxury the characters, cops and crooks alike, cannot afford. This is a given in heist dramas, but little, really, has been done to show the devastation that The Life has the personal level. Pacino has grudgingly accepted the isolation his work has forced him into, and pursues DeNiro without let up, whatever the cost to himself or those around him. DeNiro's character, in turn, has a code that says, in effect, that someone in the life needs to be ready, always, to abandon whoever and whatever is around them the minute they know the "heat" is around the corner; the tragedy is slowly set into motion as he violates his own code, his rules for existing in the life he's chosen, and attempts to take his girlfriend with him. His end is inevitable. Heat’s success, for me, is the way Mann expands the minimalist conventions of the narrative line and examines the irrevocable ruin in human relations that the characters' choices result in.

I don't know about the characters being unrealized, since I think this is in the tradition of Hemingway wherein blatant introspection is nil, but much is conveyed through a series of small details, glances, scars. Perhaps you don't see it, but there's a lot that is said between the lines here, and the acting--Jon Voight is particularly effective here with his restraint, among others--creates a tangible feeling of emotional attachment being hammered into silence by a rough trade. The bit with Pacino's daughter is the least convincing thing in the film; my impression is that Mann had four to five hours of film he had to edit to an hour. This is obviously a truncated storyline that should have been excised from the film. But it's a flaw I can live with..Mann has been taken to task for not making his case about alienation by subtler means, without resorting, as one critic wrote “….to extremism because the vast majority of people never get so mesmerized by their jobs that they lose their humanity the way De Niro does.” The complaint , of course, is that Mann loves the build up to a grand explosion of feeling where only a character’s capacity for ballistic reaction can satisfy the need. Mann, though, I think is well in the tradition of theatrical tragedy, as DeNiro’s character’s, master thief, thorough professional, a planner who makes no mistakes in his agendas, assumes that he can defy the odds against getting caught and thus assumes his carefully articulated professionalism will shield him from unlucky happenstance. He is a sufferer of unwarranted pride, a carrier of hubris who claims credit for all that great around him. Tragic form demands that the Universe correct itself, since one thing corresponds with everything else within the dramatic frame, equilibrium must be reestablished.

Heat is a tragedy, and tragedies require extremism. There is no more extremism here than you'd find in Shakespeare. This isn't saying that Mann's work here equals The Bards, but only that the out sized action we witness is in perfect scale with the tragic form. It operates at the appropriate level. Heat is a movie, and movies generally demand "extremism." Movies are required to be "larger than life", perhaps, but "extremism" here is a generic requirement of both tragedy and the noir aspects Mann is working in. The conventions of the narrative style don't allow for the middle ground, the kind of emotional richness that are reserved for the civilians of the world, with straight jobs that have regular hours. The minimal and the maximal are the options in this case, and Mann does a what I think is a credible job of getting something operatic from this story of two men , bereft of other human satisfaction and nuance, plunge ahead to an inescapably bad ending. The scale of the Heat works beautifully.

The Wire, as I said, is one of the best television dramas ever, period, and it come from writer/producer David Simon, whose book Homicide: A Year on the Killing Streets was the inspiration for the edgy, quirk- ridden genius of the late Homicide: Life in the Street, produced by Tom Fontana and Barry Levinson. Simon has a genius for getting the stories of all involved just right, and under his direction he creates complexity and grey areas and flaws and other gripping nuances in characters that make his unique style of crime fiction fascinating, arresting, moving. The distinction between The Wire and Heat, as you've alluded, is the difference between TV and movies as forms; a continuing weekly drama can develop characters over time and layers can be added without straining credulity. Movies, even long ones, have to be more efficient in the way their characters and plot mechanisms are deployed. In any event, I think both projects are fantastic pieces of work.

I have an affection for some films that have intractable flaws, along with the works of odd and flawed novels and messily writ poems, and there is much I find to like and admire in Apocalypse Now and Heat, enough, certainly, to make them worth initial and subsequent viewings. A good deal of what these two long and notable films deal with is an idea of a character's humanity getting wrapped around a Big Idea, whether it's a seduction with origins ideological or professional, and the drama, which I do believe is convincingly put across as felt experience in both these films, comes as characters find themselves making decisions to finish the tasks and duties they've set for themselves, no matter how profound their regret and misgivings are. Style, of course, has much to do with how watchable these out-sized actions are, and both Coppola and Mann managed watchable movies that caught, manipulated and sustained their respective tones. Heaven's Gate, though, I found singularly unwatchable, the problem being that Michael Cimino isn't a particularly interesting chronicler of people's lives as they move toward their destinies. Vincent Canby called worse than a forced tour of your own living room, and I'm not one to argue. The Deer Hunter, in turn was pretentious, vague, structurally incoherent from the get go, an aggravating movie that was like someone continually clearing their throat to make an Important Statement , but never delivers anything the least bit edifying.

Getting human beings as "they actually are" is a conceit, and is an impossible task. Characters in narratives , regardless of genre, are all ideal types, and the question really needs to be whether you appreciate a particular director or writer's creations in a terrain more or less created out of whole cloth. Different genres have different givens as to what sorts of nuances and backgrounds characters have; this leads us to stereotypes, of course, and what we respond to is how well someone might avoid the obvious and give us new wrinkles, twists, turns and habits of mind. David Simon is terrific at this. Mann, in turn, has his moments too.
at May 01, 2008