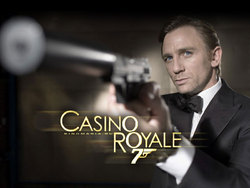 Casino Royale , the third production of Ian Fleming's first James Bond novel (the first was in 1954 as an episode of a CBS show Climax, with actor Barry Sullivan as Jim Bond, an American CIA man), launches Daniel Craig as 007, is the most impressive of the lot. Craig, I would say, is the best James Bond, period, eclipsing even the hallowed performances by Sean Connery. Not a pretty boy, and not yet the suave dude , this is Bond in the rough, closer to Micky Spillane's Mike Hammer. That is to say, this Bond is a thug, a brute, someone to whom you would give
a license to kill. Craig is a good actor, evidenced by performances in Munich and as Ted Hughes in Sylvia., and manages the right combination of cold dispatch and faint glimmers of rage and even love, but with a tight , strong hand on the reins. For all the agent's command of situations that would baffle mere citizens , there is the sense that he could have a melt down at any second. That said, the substitution of Hold 'Em poker for baccarat in the key gambling tournament makes little difference so far as maintaining what's left of the novel's integrity, though one does pause and wonder if anywhere in the world there might actually be a
table of men in tuxedos playing such a low brow card game.

Borat , in turn , is about to snickers, a snort, one belly laugh in the first forty minutes, and then it's a wallow in cheap set ups and purposeful misunderstandings. One should consider at length what is being exposed by the gullible Americans who fall for Sacha Cohen's grating put on, but this is a one joke movie that substitutes Jackass punking when the snickers and half laughs become restless giggles and eventually snores. There is more Andy Kaufman here than anyone is willing to talk about, and that is part of this movie's problem. Kaufman wasn't especially funny after a few years of his high concept performancing. Cohen , like Kaufman, practices comedy-as-assault, and there's a point in the movie where I wish one of his victims clocked him one.
at November 29, 2006