Poets Gag on their Own Gore 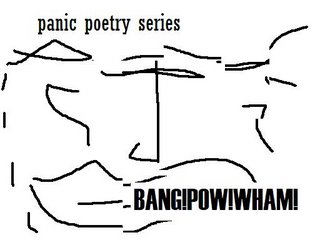 I mean no disrespect, but most of the poets who are featured in the Slate each Tuesday sound as though they are waking up from a druggy, dreamless sleep, are bound and gagged with old socks crammed in their mouths and secreted away in a trunk kept in the storage space under the stairs, or have recently been on the receiving end of electroshock therapy. Add your own sour description. But the problem is that the good poet's habit of destroying a good piece of work with an indifferent , retarded, and emotionally stunted performance is hardly isolated; one can nearly drive a truck over the dense layering of constant droning that originates with the flaccid readings the ill-spoken bards hand us. It is as inviting as asphalt rash.

The bottom line is that few poets in that forum sound happy to be doing the reading; it sounds as if they're grumbling that they have to work , for chrissakes, and life is not fair and things are rotten, and for the money they receive, these otherwise honorable scribes hand us the slowest, driest, least-contaminated-by-joy recital they can devise in their vengeful little heads.This does not encourage me to buy their books. It makes me think that poetry is something of a self-serious sham when it's read in these portentous, un-inflected ways.

Let's put some life in these readings, OK. If one lacks the pulse sufficient enough to make these poems sound interesting, they might do themselves and the readership and decline the offer to record their voice. A bad performance embarrasses everyone.

Someone I was talking to in a net forum about this situation recommended that I observe HBO's "Def Poetry Jam", where writing and performance are more obvious than one get elsewhere on pay-TV.I agree that there are some amazing writer/performers on that show, but it often goes too far in the other direction.

Every word has to be absolutely per-formative, every gesture has to be over-sized, large, exaggerated beyond need, every line has to be declaimed as if it were the neutron bomb of punchlines, and just about every voice of every reader has to follow the same rhythmic pitch, the same inexplicable accelerations and slowing downs, the same beat-box repetition's of vowels that destroy an idea rather than reinforce it.

It's a monotony of content and presentation that makes the weekly line up seem nearly as form-fitted as the mainstream, academic, white-bread poets that are very easy to make fun of. It's something of an old joke straight from Lil Abner, where all the kids want to be nonconformists just like everybody else.

I would be very interested if HBO gave Quincy Troupe a deal where he could produce and select the talent, as he has for the last twelve years in La Jolla with his brilliantly arranged series Artists at the Cutting Edge. Troupe knows that quality needs to be matched with quality, and the poets and writers he's brought to San Diego would be an example for the producers of Def Poetry Jam as a means of livening up-their mix: Derek Walcott, Allen Ginsberg, Tony Morrison, Charles Wright, Bei Doa, Jerome Rothenberg, Amiri Baraka, Gary Snyder, David Foster Wallace and scores of others, of many races, creeds, colors and politics , have all read in this series. Most, also, were able performers of their own material, and it is from these writers , scribes who've not only discovered their voice in their work but also a way in which to verbally dramatize it, who are fit and diverse models for those who imagine themselves ready to move beyond the rhythms and clicks that comes through their head sets.
at August 01, 2006