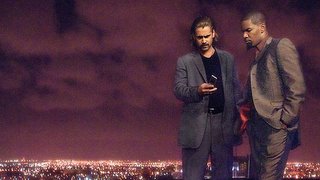 Director Michael Mann has brought his old TV show Miami Vice to the wide screen, and the results are darker, grittier, nastier. But lets place the emphasis on darker. The original was bright pastel pinks and saturated sunshine up and down the Florida coastline, the movie, starring Colin Farrell and Jamie Foxx as the undercover Sonny Crockett and Rico Tubbs, is in severe contrast  dark , as if filmed from inside a bottle of Coca Cola. Night sequences are what Mann does brilliantly, evinced by how sexy , alluring and alienated he made downtown Los Angeles appear in his previous film Collateral; this is a world of taciturn masculinity set against black and amber city scapes and empty industrial sites where the gears of inevitable violence are enacted in quick, cryptic spasms of dialogue. The plot itself is hard to follow, as drug-trafficking stories usually are, and it's a vain effort to seek philosophical substance or solace from what any of these characters are saying; Mann's films are about the actions characters take to define themselves and maintain their authenticity, moral or immoral, in a world where poses and equivocation are the norm. To be sure, there is a rousing fire fight between good guys and bad guys at the end.Colin Farrell as Sonny Crockett fairs better than you had a right to expect; gravely voice ala Nick Nolte, slicked back hair and handlebar mustache, he takes his terse dialogue and offers up a face that is determined to see his mission to the end even with the knowledge that he and his partner's efforts against the drug trade is a war lost from the outset. Jamie Foxx , in the role of partner Tubbs, is a convincing mass of sleek, muscled anger, a man with deep wounds with the discipline to contain his rage into a drive to undermine the drug dealing bad guys foul enterprise and to make them accountable for the evil they've insinuated into the populations. Miami Vice is short on compelling dialogue or an articulate expansion of the moral ambiguity of selling drugs to a clientele willing to forgo safety and health for a momentary chemical distraction--there are no Bondian villains who suddenly become philosophers expiating about the inevitability of vice and challenges to right-thinking--but it is rich in style and mood. What he lacks as a thinker Michael Mann makes up for in a beautifully mounted  evocations of masculine adventure, sullen, unshaven, muscular, terse, matter of fact, elegant in action, decisive  in results. Hemingway would have liked these movies.
at August 04, 2006