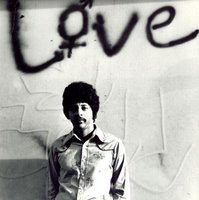 Arthur Lee, lead singer, guitarist and principle songwriter for the seminal Sixties Los Angeles rock band Love, has passed away at the age of 61, succumbing to acute myeloid leukemia. It's impossible to understate the importance of Lee's work with Love during that critical time; in a time where it was the norm for white bands to adapt black American musical traditions, Lee, an African American, took on the guise of a "black hippie" and embraced English British rock in the guise of the Stones and the Beatles, and he wasn't above blending it with a surreal smattering of MOR vocal stylings.

As a vocalist , he was a unique and brilliantly transperent , alternating between a Mick Jagger glottal, semi-Delta moan and grunt, and the honey-toned tenor of Johnny Mathis. It was genius, intended or otherwise, that he would assimilate the influence of a British singer who made a career emulating black American soul singers, and a popular black singer who crooned with out a trace of racial signifiers other than the "good music" expectations desired by a broad, mostly white audience.

This , combined with a a sensibility that effortlessly fused hard rock, folk, classical and jazz, and sweetly odd and dreamy psychedelic lyrics, and we have a genius that though short lived inspired a generation or two beyond. Forever Changes, Love's third album, is considered by many to being the best American response to the Beatles bar-raising disc Sgt.Pepper's Lonely Hearts Club Band. As is too often the case, Lee's is a case where the great creative period
was short lived; drugs, jail, eccentricity and erratic behavior prevented him from regaining the heights he reached with Forever Changes.There are very, very few rockers, though, who have the bragging rights to being the creator to such a masterpiece. Rock on, Arthur.
at August 05, 2006