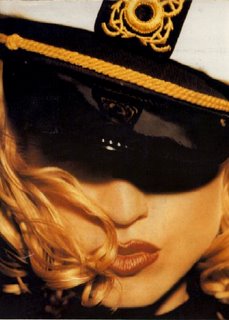 There's an interesting piece in Salon by a writer who wonders in print whether going to see Madonna in concert, "lithe" at age 47, indicates that she, the writer, is turning into an old fogie in her early thirties. The horror of turning into your parents.

Madonna, lithe or not at 47, was musically forgettable for her entire career, but she is to be admired for the sheer genius of her presentation.At 47, she reinvents herself beyond irrelevance, and is poised at becoming something like her generation's Charo or Joey Heatherton.

Nominally talented as dancer and singer, there is nothing to stop Madonna from being consigned to the feather lined cage for Professional Celebrities; being famous will Madonna's trade, not music, not lyrics, not tacky stage productions or spotty albums. It's been said often enough that she was greatest work of art--nothing new there, just ask David Bowie--but there doesn't seem to be anything to stop her from becoming a well paid Freakish Has Been as she ages further and "the edge" she seeks to keep finally and irrefutable eludes her for good.

Sad to say, but there are tales that she plans another to-do on the forthcoming MTV Music Awards where she'll again kiss a much younger woman singer. At this rate she might as well start kissing babies and run for office. That's where her true talents lie; the ability to be many things to many people and stand, finally, for nothing at all.
at July 21, 2006